You are here: Home / Books To Read / The Forbidden Letters, a true story by Hemu Aggarwal 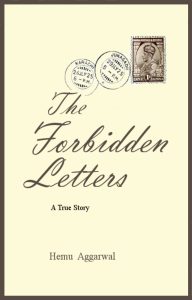 About The Forbidden Letters, a true story by Hemu Aggarwal:

Rigid norms and rules in some cultures suffocate the lives of young people. The book highlights such regulations and their consequences and shows how one young couple subjected to such norms eventually breaks away from them and allows their children to grow unfettered by them.

The book includes 216 of the 500 century-old letters found in an attic. It tells the story of a young couple’s life, married when they were still teenagers, but lived apart intermittently for eight years. The letters describe their love for each other, the agony of separation, taboos of the times, and the hardships endured by women in a joint-family system. The book also describes the couple’s encounter with deadly diseases and the unwanted adoption of their child by another family. Crossing cultural, country, gender, and age boundaries, you take on a tumultuous 100-year journey from India to America, shedding the shackles of a joint family and allowing the next generation the freedom to chart their destinies.

This story of the book crosses the boundaries of CULTURES (Eastern to Western), COUNTRIES (India to America), and CENTURIES (20th to 21st). A hundred-year journey – 1922 to 2022.

Hemu Aggarwal has an M.F.A. (Masters of Fine Arts) degree and over 45 years of experience in the art industry.

She just published her first book, The Forbidden Letters. A True Story on Amazon Books. She has worked at Barnes and Noble as a book designer and has designed many books and covers. Hemu also loves to write poems. They published several of her poems on https://spillwords.com/hemuaggarwal.

She has a Master’s degree in Graphic design. She has created many album covers of well-known artists like Tom Jones, Mantovani, Engelbert Humperdinck, Brotherhood of Man, and Frijid Pink, Aretha Franklin, Quincy Jones, one of the last records of the Beatles, and a single by John Lennon and Yoko Ono. This experience enabled me to start her own company, AQ Graphics Inc., in New York, and she continued in this line of work. She designed many Hip-Hop albums, including Grandmaster Flash and Furious Five’s “Message” album, The Sugar Hill Gang, Positive Force, Treacherous Three, and many others. Please read here about her Hip-Hop career.

Hemu has won several awards, including 2nd place for her painting “The Dancing Pair” in an online art competition by CAGO (Contemporary Art Gallery Online).

Hemu’s paintings appear on many fashion wears and other merchandise.

Hemu loves to play tennis. She is a PTR Certified Tennis Coach and an official coach for Play Your Tennis and My Tennis Lessons.

She lives in Petaluma, California, with her husband, Yash Aggarwal.