You are here: Home / Books To Read / “godless children have no heroes” 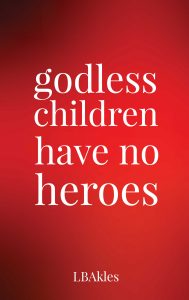 About “godless children have no heroes”:

Her world had been perfect. And then it wasn’t. Faced with impending devastation and loss of control, Lex begins to spiral into survival mode, making risky choices bound for consequence, whatever it would take to not lose what was hers, whatever it would take to escape the emptiness of old demons. This life she existed for, who would she be without it? This person she had become, was it just a façade? Was she defined by her secrets? And when confronted by her actions, trapped in a dangerous game that risks her life and the lives of those she loves, will she be able to escape without retribution?

In survival, right and wrong are all relative.

Author Bio:
LB Akles spent her childhood living in both Michigan and Arizona. As a young adult she moved to Southern California, drawn to it from early childhood, because, in her words, “as a small child, music and television were my lifeline and I always thought that I would be safe if I lived in Hollywood.” With a busy career as an IT Business Manager, LB cherishes downtime with her family and throwing the ball for her dog, Zero, who is relentless. She loves the warmth of a desert monsoon, the intensity of Maui sunset, and Hawaiian Shave Ice from Ululani. ‘godless children have no heroes’ is her first novel.