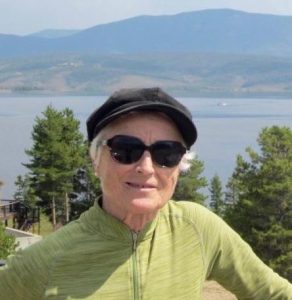 Tell us a little about yourself. Where were you raised? Where do you live now?
At the time I grew up in a tiny village in Germany I already dreamed of travelling to far-away places and seeing the big wide world. At the time–this was postwar Germany–I had no reason to believe I would ever get any further than to the next town down the road. My father had been killed in the war and our family was poor. We had no running water, no electricity, no car and certainly no thoughts of traveling anywhere. Still, during my high school years my dreams became more specific, wanting to go to Tibet and Mongolia. Though I never made it to those two countries, I was lucky.

At the age of nineteen I was on a boat to the United States where I ended up earning a PhD in History and Far Eastern languages at Harvard, specializing in Chinese and Manchu studies. Besides learning Chinese and Manchu I studied Spanish, French and Japanese, dabbled in Russian, Usbek and Turkish, traveled by myself around the world twice and lived in Switzerland, Taiwan and Japan.

Over the years I worked as a researcher for a refugee resettlement organization and later served as Director of the Office of International Programs and Services at the University of Hawaii. After calling Hawaii home for thirty-four years, my husband (originally from Taiwan) and I are now retired and live in Highlands Ranch, Colorado, accompanied by our cat Tigger.

My hobby of 20 years: Bookbinding. I loves to repair dilapidated books, especially old ones.

At what age did you realize your fascination with books? When did you start writing?
I’ve always loved books and spent a ton of my life in libraries, as an employee, as a student or patron, for a few years as a board member and for fifteen years in the University of Hawaii library’s Preservation Department. My very first job was in the Houghton Library, Harvard’s rare book library, where I was hired as a typist, a job which gave me a chance to handle a lot of very old (and often very expensive) books. I didn’t start writing until much later, when I did my first Manchu textbook.

Who are your favorite authors to read? What is your favorite genre to read. Who Inspires you in your writings?
My interest is in non-fiction, though I may also occasionally read fiction in order to brush up on my foreign language skills. I’ve always liked history and philosophy, and any books about how to live life to the fullest.

Tell us a little about your latest book?
I had a real great time working on and writing my latest book: “Lights & Shadows: Discoveries Away From Home. Perspectives on American, German and Chinese Cultures.” It took me over ten years, but I never got tired of it. The best part of the process — the entire book is based on informal interviews –was that it gave me a chance to meet more than a hundred Americans, Germans and Chinese whose interests and experiences were very similar to mine and who were eager to share them with me. In some cases these conversations led to lasting friendships which I treasure to this day.