You are here: Home / Books To Read / Don’t Ask by Gina Roitman 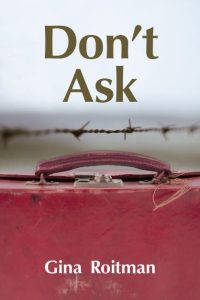 About Don’t Ask by Gina Roitman:

“Don’t Ask” poses the question: who packed the baggage we carry from birth? In this literary thriller, a Jewish woman agonizes over her mother’s suicide and is thrown into turmoil over her romantic attraction to a German.
Hannah Baran is 45, a successful Montreal real estate broker with a highly lucrative client who, like her parents, is a Holocaust survivor. Born in a German DP camp, she is the only child of Rokhl and the late Barak. One day, she arrives to find her mother gone and a mystifying note that reads: I am not her.
Throughout Hannah’s life, Rokhl’s notes have been all the guidance she received from a laconic, emotionally-remote mother, a foil to Hannah’s voluble father who rescued Rokhl from Auschwitz. When Hannah announced that she must travel to Germany on business, Rokhl threatens that should Hannah ‘go to that land of murderers,’ it would be over her dead body. Three days later, Hannah locates her missing mother in the morgue.
Secreted away in a confessional journal for Hannah to find one day is Rokhl’s confession about a life filled with loss, betrayal, and guilt. The mother’s story is woven into the intrigue over a contested piece of land in the Quebec Laurentian mountains, a struggle between two real estate moguls, and an impossible love affair, all of it weighted down by the baggage of history.

A short story writer, biographer, memoir writing coach and former penguin herder (but that’s another story), Gina’s first novel is the historical fiction, “Don;t Ask”. She is also the author of the critically acclaimed collection, “Tell Me a Story, Tell Me the Truth”; and a biography, “Midway to China and Beyond.” Her essays and short stories have aired on radio and appeared in anthologies, most recently, “The New Spice Box” and “Wherever I Find Myself.”
In 2013, with Jane Hawtin as Executive Producer and Director, Gina co-wrote and was the subject of the award-winning documentary film, “My Mother, the Nazi Midwife and Me.”