You are here: Home / Advice & How To / Whispers and Wailings 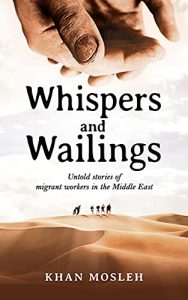 About Whispers and Wailings:

The book Whispers and Wailings is based on eight years of research. The author, Prof. Khan Mosleh, has lived and taught in various countries in the Middle East since January 1, 2012. In this long journey, he has come into contact with thousands of Bangladeshi immigrant workers and heard from them the tragic history of their lives. Although the workers are termed ‘remittance fighters,’ they are neglected by their own country. In the Middle East, they are called ‘Miskin.’ These heroic workers sacrifice their happiness for 12 to 14 hours a day and 7 days a week and to bring smiles to the faces of their country and family.

When the author came in contact with Hossein, a domestic help in a neighboring house in 2016, he came to know the details of his daily life. After seeing Hussein up close and knowing his unknown life story, a latent desire arose in the author’s mind that these workers need to tell their story to the world. He started recording different people’s stories little by little, and continues to do so. The book tells the life story of the workers and describes the geographical and social aspects of the Middle East.

The book includes an article on what you need to know about employment abroad, especially in Qatar and UAE. The book is dedicated to these immigrant workers. The author also wrote three books in the Bengali language, two original Attomoprokash (Self-revelation), Shonar Horeiner Khonje (Bengali version of Whispers and Wailings) and the Bengali translation of The Kite Runner by Khaled Hosseini.

Author Bio:
Prof. Khan Mosleh was born and raised in Kushtia, Bangladesh. His primary and secondary
education began in Kushtia; upon completion, he left Kushtia and studied Applied Physics &
Electronics at Dhaka University is often called the Oxford of the East. In March 1982, he came
to the United States of America in my pursuit of higher education. Professor Mosleh is currently
teaching for the University of Maryland Global campus in its European division, primarily in the
Middle-east region. During the last eight years, he had done extensive research on the condition
of third-world country nationals (TCN) working in the Middle east. Their sub-standard living
conditions and inhuman treatment by their employer. They are the victims of modern-day
slavery. Prof. Mosleh interviewed about a thousand TCNs in the last eight years about their
living conditions, pay rates, working conditions, mistreatment abusiveness at work, CTIP
(combating trafficking in person), and their family background. The book WHISPERS and
WAILINGS is based on these unfortunate migrant workers. He wrote and published the Bengali
version of this book, SONAR HORINER KHONJE, in Bangladesh. His first published book,
ATTMOPROKASH became the #3 best-selling list in Bangladesh. The author also translated
The Kite Runner by Khaled Hosseini in the Bengali language.