You are here: Home / Books To Read / Under the Mistletoe 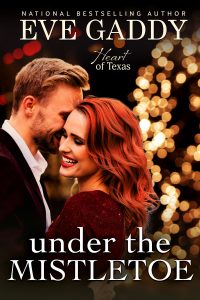 About Under the Mistletoe:

Can a kiss under the mistletoe be the beginning of a beautiful relationship?

Firefighter and paramedic Spencer McBride has never been tempted to change his happy-go-lucky bachelor status—until he literally runs into cute newcomer Georgie Durant under the mistletoe.

Wounded after giving her heart to a man who wouldn’t commit, paramedic Georgie Durant has come to Last Stand for a fresh start. Though tempted by the handsome Spencer, she’s too leery of his easy charm and the pitfalls of a workplace relationship to risk one with him.

But as they spend more time together amid the Christmas gaiety and Georgie sees Spencer’s dedication and devotion to the people he helps, she begins to wonder if this beguiling coworker could be different.

Spencer has always been a man who knows what he wants—and he wants Georgie. But when the man from her past comes to town, determined to win her back, can Spencer convince Georgie to take a second chance—with him?

Author Bio:
Eve Gaddy is the award winning, national bestselling author of more than forty novels. Her books have sold over a million copies and been published in many countries and several languages. She writes contemporary romance, romantic suspense, romantic mystery, and a bit of paranormal romance as well.

Eve’s books have won and been nominated for awards from Romantic Times, Golden Quill, Bookseller’s Best, Holt Medallion, Daphne Du Maurier and many more. Eve was awarded the 2008 Romantic Times Career Achievement award for Series Storyteller of the year, and was nominated for a Romantic Times Career Achievement Award for Innovative Series romance. She loves her family, books, dogs, chocolate, electronics, the mountains, and East Texas in the spring and fall. She also loves a happy ending. That’s why she writes romance.