You are here: Home / Books To Read / Toxic Beer by Simon Bullock 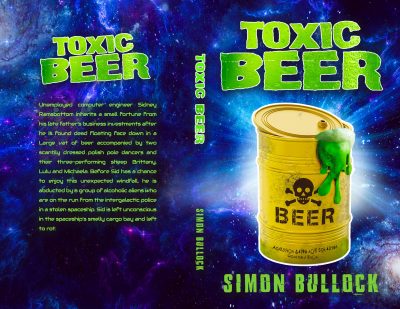 Before Sid has a chance to enjoy this unexpected windfall, however, he is abducted by a group of thieving alcoholic aliens who have been bumping and burping their way across the universe while on the run from the Intergalactic Police in a stolen spaceship.

Sid is left unconscious in the spaceship’s smelly cargo bay and left to rot while the aliens set forth to carry out their plans for the planet Earth. They don’t come in peace, and are not here to conquer. Instead, they simply want to solve two knotty problems and get back to their carefree, partying ways. One, to offload a mass of leaking toxic waste on their spaceship before it gets them first. Two, and this is the bigger issue, how to maintain their insobriety when they are left dry after 100 years of being drunk.

Their young engineer, Harry – a nice guy who is newly appointed after the gung-ho, trigger-happy captain shot his boss – has, thankfully, devised a plan to put everything right. His idea is to hide on the Moon and send shuttles down to Earth to drop off and repackage their waste as a particular toxic tipple, and re-stock up on booze. What could possibly go wrong?

It’s up to Sid, if he can escape his captors, along with a retired policeman and landlord to save the day. While the aliens have close encounters of the blurred kind, our unlikely heroes will need excessive good luck, a strong stomach, and a sense of humour for everything that’s coming their way.

Author Bio:
Simon, who works as a medical engineer, has had a lifelong passion for writing as well as sci-fi comedy.

Toxic Beer has been a decade in the making but, as readers and critics alike attest, has been worth the wait. Simon’s zany, joke-rich and earthy storytelling will appeal to anyone who loves the likes of Douglas Adams’ Hitchhiker’s Guide, the writing of Robert Rankin, as well as classic British TV sci-fi comedy show Red Dwarf and cult sci-fi comedy film Galaxy Quest.

With his first, critically-acclaimed novel having gone down better with readers than a cool pint on a scorching day, Simon is now working on a follow-up to Toxic Beer – a prequel revealing the bleary-eyed aliens’ escapades during their extended inter-galactic booze cruise.

Originally from the UK, Simon currently lives in Utrecht, Netherlands with his wife Chrissie and two cats. In his free time he enjoys cooking and likes to brew homemade beer with more kick than an Arcturian MegaDonkey.