You are here: Home / Books To Read / TO DANCE OR NOT TO DANCE by L.R.Johnson 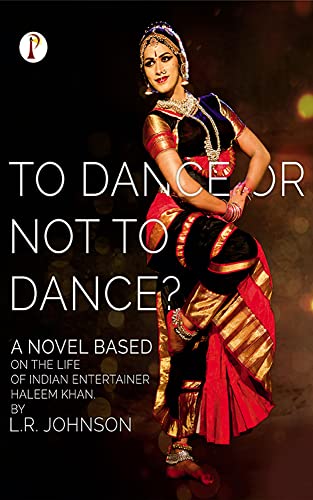 TO DANCE OR NOT TO DANCE by L.R.Johnson

This fictional-biographical novel/eventual screenplay, is based upon a male, Muslin classic dancer called, Haleem Khan. In the novel, the main character, similar to the real person, was born to be an entertainer. At a very early age the main character was attracted to an Indian classical dance form called, Kuchipudi. Through his early school years up to adulthood he was confronted with differing forms of discrimination, prejudice, and attacks, based upon ignorance pertaining to his ambition to become a classical Kuchipudi dancer because many male dancers perform dressed as females. One can imagine the insults and discrimination directed at the character, especially being a Muslim in a Hindu majority part of India. I managed to form a novel/screenplay utilizing every emotion possible i.e., love, hate, anguish, fear, joyfulness, and quite common in India, paternal pressure, or even rejection, when the male child does not agree with his father’s subjective ambitions. This causes many upsets and family disruption.
The story will hopefully, make people laugh, cry, feel deep anger and, for those who regard men being attracted to effeminate art forms, or prejudice against peace-loving Muslims; to look in the mirror and rethink. It matters not from which ethnic/religious background we are born into, sexual preference, or the colour of one’s skin, we all remain human beings.
This pro-active story, built around a real person, is an invaluable insight for those who prefer to discriminate before understanding and accepting that humans are just one huge melting-pot of diverse emotions, colors, beliefs, and sexual preferences. It will entertain the reader whilst giving the reader a sense of affinity to those who exist in such minorities. Especially towards those who are bullied and terrorized for their diversities, are forced to hide their true identities, but still manage to put smiles on our faces, entertain us, and prove to us through diverse forms of creative art, how wrong we all are to discriminate against those who are slightly different.
L.R.Johnson

Part time author, L.R.Johnson, has had five titles traditionally published in the USA, Australia and South Africa. He resides in Germany, now retired, with his wife and is a British citizen. His literary/film agent, Emerantia Parnall-Gilbert from New Zealand arranged three titles to be published in Texas and one of the titles has a Hollywood film contract still to be filmed.
His interest in writing books commenced after writing for a daily satirical website called, The Spoof. He accumulated many global followers and inspired by his superb colleagues on the site decided to venture into writing books.
Two of his titles were written in commission, one a biography about a Slovakian artist, both in English and German, the other, a biography based upon the life of an Indian classical dancer. In addition, he also completed a biography about his brother (RIP) whose life was quite volatile and most interesting. These titles were self-published.
Two other titles have been issued, one a compilation of wonderful art by Liesbeth Johnson-Kampen and, Francis Charlton, plus a collection of poems written by the author. The other title is a raw British humorous book about a ‘nobody’ who succeeds to become ‘somebody’.
L.R.Johnson is now contracted to Pharos Books, New Delhi, India with six titles including the ERSKINE QUINT TRILOGY / TO DANCE OR NOT TO DANCE / THE UNACCEPTABLE TRUTH, plus a series of illustrated children’s books called, ANTON THE FARM CAT AND HIS FRIENDS.