You are here: Home / Books To Read / Theodyssey 1. Privateer by I K Dirac 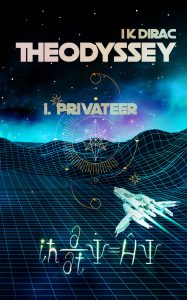 About Theodyssey 1. Privateer by I K Dirac:

Sir Sechaverell de la Beche bart, baronet, cross-dresser, gourmet and opera-lover, is the captain of the privateer spaceship, HMS Bountiful. His swashbuckling reputation and less than orthodox methods mean that he is much in demand for missions of a less than orthodox nature. In Book 1 of the Theodyssey trilogy he is contracted by a Galactic federation to recover the Holy Kwokkah, an object sacred to one of its planets, that is believed to be in the possession of a rival Galactic empire. In company with his companions, including Jim the cabin boy, he has to outwit the self-important leader of the empire with a mixture of flattery, guile and force. He employs an ancient ruse, and is aided, not always reliably, by armed mercenaries and the leaders of a feminist planet with their own agenda, in a tale that is also a satire on religion with a parody of quantum mechanics.