You are here: Home / Books To Read / The Year Before the End by Vidar Hokstad 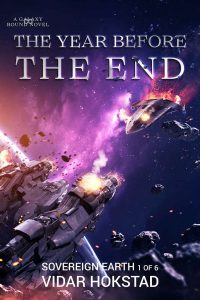 About The Year Before the End by Vidar Hokstad:

Forty years ago humanity found out we were not alone. The Centauri offered us the galaxy.

With one year to go before the gate is ready, Captain Zara Ortega learns of a conspiracy between Mars separatists and the Centauri to split the solar system between them. The crew of the ship Black Rain goes on a daring raid from one of the most well-guarded stations in the system to uncover the truth, but an attack on their ship raises more questions.

A meeting with their contact near Mars goes badly wrong and leads them into a chase through the asteroid belt in a desperate bid for survival.

Deceit and betrayal have put not just their lives on the line, but the future of humanity.

Author Bio:
Vidar Hokstad grew up near Oslo, Norway. He started writing at an early age, but put it aside to focus on technology – his other passion. He has co-founded a number of technology companies, and moved to London with one of them in 2000.

Ca. 2016 he started thinking about an expansive series of sci-fi novels that became “Galaxy Bound”, but put aside for other commitments. In 2020 he picked it up again, and wrote and published the first Galaxy Bound novel.

Vidar lives in London with his son.