You are here: Home / Books To Read / The Temptress: A Novella 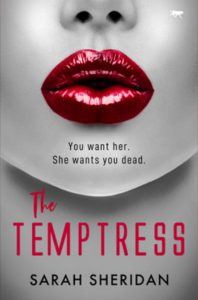 About The Temptress: A Novella:

In this clever new thriller by the bestselling author of Girl in Bed Three, a serial killer wants to quit—but it seems a woman’s work is never done . . .

Zoe is a journalist who loves cats. She also happens to be London’s most successful active serial killer. It’s not something she ever planned to become—it’s just that men always trigger her rage, just like her abusive father did.

Now in her late thirties, Zoe feels like she’s lost her knack for murder, especially since finding a promising relationship. But things get complicated when her estranged mother turns up. With all the stress in her life, she’s starting to make little slip-ups—and her attempt to retire from her side gig may not last long . . .

Sarah was born in London and now lives in a village in South Northamptonshire. She gained a Masters degree in Eighteenth-Century French and English art from the Courtauld Institute of Art, before teaching art in secondary schools for thirteen years. After working with human rights organisations that protect minority groups from institutional abuse, Sarah worked towards a PhD at The Open University, researching the effect of secrecy on marginalised people, specifically the biological children of Roman Catholic priests. She has spoken about her research on various news programmes for the BBC and other media outlets around the world. It was this sense of secrecy and silencing that became the inspiration for her first crime novel, The Convent.

Sarah is hugely obsessed with reading and is amassing such an unrealistically large book collection that some of it is now in storage. She is also addicted to writing, and after inventing stories (mostly in secret) from a young age and having various articles and short stories published, she wrote a children’s book, The Top Secret Diary of Davina Dupree – inspired by her daughter – in 2013. Overjoyed to hear that young readers were enjoying the story, she went on to write a series about Davina Dupree.

When she is not looking after her three children and menagerie of pets, or going for long walks with her wonderful partner Rich, Sarah can be found writing, while consuming large amounts of chocolate.