You are here: Home / Books To Read / The Suicide Society by William Brennan Knight 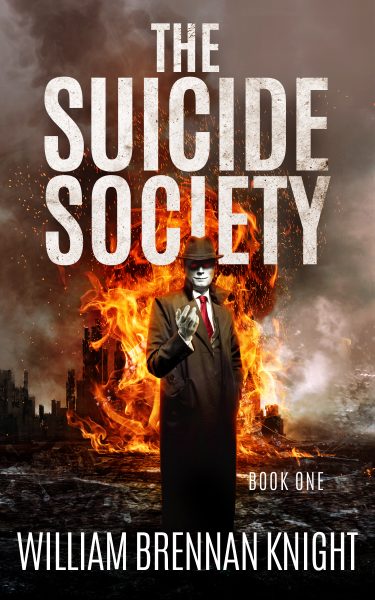 Do you sometimes feel like we’re all being led down a one-way path to self-destruction?
It’s like we’re living in a tinder box, and someone or something keeps nudging us a little further towards a totalitarian dystopian future…

Just one match can send everything up in flames… Who or what is behind this nebulous sickness and hatred that infects the very soul of humanity? Every day we’re exposed to reports of increasingly horrific brutality even as we try and cope with our own personal anguish.

How did it come to this?

After an unsuccessful suicide attempt, Zach Randall, a self-absorbed accountant, experiences disturbing visions of tortured souls preparing to die by their own hand. Initially dismissing the dreams as mere hallucinations, Randall begins to suspect there is deeper meaning hidden within each vision. Could these people be real? And who is the dark, mysterious entity who competes for the loyalties of the despondent and tormented before they breathe their last breath?

The Suicide Society is a supernatural thriller that evolves as a story of evil and a carefully devised plan to infiltrate every aspect of society for the purpose of promoting hate, chaos and ultimate destruction. As the clocks continues to wind down, Randall races to uncover the apocalyptic plot and expose the gifted leader of a massive covert network that relentlessly drives the world closer to a global catastrophe.

If you like books by DJ Molles, Stephen King, Dean R. Koonce, Joe Hill, Robert Masello, Clifford D Simak, and Eloise J Knapp, you better clear some time in your calendar for The Suicide Society Series because you’ll want to read all the books from cover to cover.

Author Bio:
William Brennan Knight is originally from Chicago and settled in Arizona in the late 1980s. In his life, he has been a father, musician and business owner. His passion for writing began early in his childhood and flourished as he grew older. He enjoys reading horror, supernatural thrillers and science fiction as well as memoirs and biographies.

Knight currently lives in Southern Arizona and spends most of the summer in Ruidoso, New Mexico.