You are here: Home / Books To Read / The Snow Bride by Lindsay Townsend 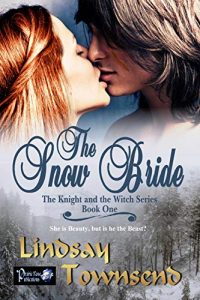 About The Snow Bride by Lindsay Townsend:

She is Beauty, but is he the Beast?

Elfrida, spirited, caring and beautiful, is also alone. She is the witch of the woods and no man dares to ask for her hand in marriage until a beast comes stalking brides and steals away her sister. Desperate, the lovely Elfrida offers herself as a sacrifice, as bridal bait, and she is seized by a man with fearful scars. Is he the beast?

In the depths of a frozen midwinter, in the heart of the woodland, Sir Magnus, battle-hardened knight of the Crusades, searches ceaselessly for three missing brides, pitting his wits and weapons against a nameless stalker of the snowy forest. Disfigured and hideously scarred, Magnus has finished with love, he thinks, until he rescues a fourth ‘bride’, the beautiful, red-haired Elfrida, whose innocent touch ignites in him a fierce passion that satisfies his deepest yearnings and darkest desires.

Lindsay Townsend lives in Yorkshire, England, where she was born, and started writing stories at an early age. Always a voracious reader, she took a degree in medieval history and worked in a library for a while, then began to write full-time after marriage.
She is fascinated by the medieval and ancient world, especially medieval Britain, where she set A Knight’s Vow, A Knight’s Captive, A Knight’s Enchantment and A Knight’s Prize (first published by Kensington Zebra, now reissued at Amazon for just 99cents) and also The Snow Bride, A Summer Bewitchment, and Dark Maiden, (all published by Prairie Rose Publications in both ebook and paperback). Lindsay is also intrigued by ancient Rome, Egypt, and the Bronze Age. Flavia’s Secret, a historical romance set in Roman Britain, came out from BookStrand in 2008, and two more historical romances, Blue Gold, set in ancient Egypt, and Bronze Lightning, set in Bronze Age Greece and the Britain of Stonehenge, were published by BookStrand in early 2009. These ancient world historical romances are now reissued through Amazon at just 99cents.
BookStrand also first published Lindsay’s sweet and sensual romantic suspense, set in various countries including Britain, Greece, Italy, and Spain. These romances are A Secret Treasure (set in Rhodes), Palace of the Fountains (set in Spain), Chasing Rachel (set on Dartmoor, England), and Holiday in Bologna (set in Italy). These titles are also now reissued through Amazon at just 99cents
When not writing or researching her books, she enjoys walking, reading, cooking, music, going out with friends and long languid baths with scented candles (and perhaps chocolate).
Here’s an interview which give more insight into my life and writing:

Do you want each book to stand on its own, or are you trying to build a body of work with connections between each book?
I write each of my stories to stand alone so they are complete, satisfying reads, but at the same time I also love to explore connections between characters. So for example Yolande, my heroine in ‘Dark Maiden’ has a daughter Sofia, who we see in her own story ‘Sir Baldwin and the Christmas Ghosts’. Those kinds of family ties are fun to explore.
What did you do with your first advance?
My first advance was from a glossy magazine called ‘Essentials’ for a comic ghost story. I used the advance from the story to replace the gear box for our car, which had chosen that week to die on us.
What’s your favorite under-appreciated novel?
‘Precious Bane’ by Mary Webb. It’s very romantic, love overcoming malice, and it’s written in an engaging first person style, very immediate and feeling very authentic. Reading it I experience the countryside, its beauties and folk customs, its dangers and evils.
What genre do you consider your books?
Romance. I love having my hero and heroine win through to a HEA. I love the breadth of romance, how it can be both true-to-life and magical. I love exploring relationships and the whole aspect of characters getting to know each other and revealing who they really are through their feelings.
Have you considered writing in another genre?
Do I have to choose? (My hubby will tell you I hate having to make a choice… the dithering will go on for a while!) Honestly, I love romance, historical romance and the romantic suspense genres and often blend them in my writing, so that there’s a mystery in ancient world historical romance ‘Flavia’s Secret’ (What’s she done and why is it dangerous?) and there’s a historical mystery in my romantic thriller, ‘Palace of the Fountains’ (Why is a sword called the Moon Lily so important?) There’s a romance and mystery in my medieval romance ‘Snow Bride’. (Will scarred knight Magnus ever find love, will Elfrida the witch? Why are they seeking missing brides? Who is the necromancer?)
I have wondered about writing another genre but have discovered I love the romance genre too much. I once started a psychological thriller, rather dark, only to discover part-way through that it was turning into a romantic thriller. I do like to stretch the romance genre, as I did with my medieval romance novel ‘Dark Maiden’, which touches upon the Black Death, demons, end times and ghosts, with a black female exorcist as my heroine.
What is your favorite genre? Why?
Romance again! I love writing about characters under stress, especially ‘normal’ characters who have to do extraordinary things in order to win through and survive. History gives writers a wonderful chance to put characters in very dangerous, stressful situations. So, I find, do thrillers. So I write mainly historical romance and some romantic thrillers. These sub-genres of romance satisfy both my action and adventure and romance needs.
When you develop characters do you already know who they are before you begin writing or do you let them develop as you go?
A little of each. I like to have a rough idea before I begin as to my hero and heroine’s backstories, what drives them, what their fears and secrets are, what their hopes are. I find my people tend to evolve as the story takes shape and often they surprise me. I don’t plan too much with my characters, as I find that keps my interest and writing fresh.
I choose names with care. Names are important. They can imply age, class, race, status, popularity or unpopularity – the last two are especially true of nicknames. My character might be named after someone – I need to know how do they feel about that. I need to know if how they feel has a bearing on my story.
I try to be consistent with whatever I’ve chosen for my characters. I make a note somewhere of their age, looks, job, main virtue, main vice, what they want, what they don’t want others to find out and so on. I keep that note handy so that I can refer to it.
I try to show my characters in action in some way, so that they are not passive.
Out of the protagonists you’ve written about so far, which one do you feel you relate to the most?
All of them! But especially my ‘Beauty and Beast’ pair of Elfrida and Magnus. Elfrida is a medieval white witch and Magnus a knight who has been knocked about and wounded in the Crusades. I found they kept ‘talking’ to me even after I’d finished writing about them in ‘The Snow Bride’ so I wrote a sequel, ‘A Summer Bewitchment’. My knight and witch also appear in my novella ‘Sir Thomas and the Snow Troll’ and possibly in future stories.
Where did your love of books/storytelling/reading/writing/etc. come from?
From my family. My parents were great readers—my mum loved sagas and historical romances and my dad loved thrillers and action stories. My great auntie Jessie loved westerns and my great auntie Evelyn loved ancient Roman epics. When I was a teenager I would pinch their library books to read in turn!
All of my mum’s side of the family were great storytellers. I remember mum telling us stories of the Arabian Knights on long car journeys and my dad reciting nonsense rhymes. We all loved epic films – Ben Hur, Where Eagles Dare, Spartacus. That larger-than-life aspect has always stayed with me. One day, I hope to write a story about a genie, to explore that more.