You are here: Home / Books To Read / The Sigian Bracelet by George Tome 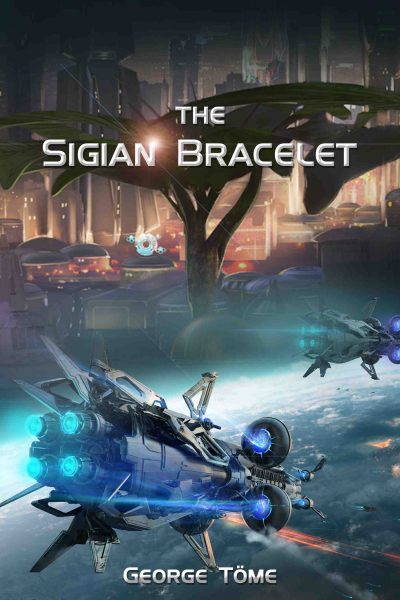 The Sigian Bracelet by George Tome

On a beautiful summer morning some 1,250 years before the start of our story, the fleet of an advanced civilization arrived on the Antyran home planet. It wasn’t a pleasant encounter – at least not for the ancient Antyrans, because the aliens burned their ice cities to the ground and locked the whole star system inside a space distortion that held them captive ever since, hiding the stars.
And then, on another beautiful day, the discovery of a few fragments from a spaceship buried in a ravine on one of the recently colonized worlds will open up the chest of madness.
Gillabrian, or Gill, as friends use to call him, is an Antyran archaeologist. After stumbling upon the terrible secrets of the ancient aliens, he finds himself in the unenviable position of being hunted on all the Antyran worlds, and not only there.
The path laid before Gill forces him to change, to discover that he has the strength to overcome his fears and make the right choices even against overwhelming odds. But beyond that, he is compelled to explore the meaning of being alive, to glimpse the fine line between life and death, and find how technology would eventually blur their boundary.
Being thrown in the river of madness, he will reach the point where any choice is a bad choice, when defeating a foe could open the path for an even greater evil, when the light at the end of the tunnel is the hideous grin of a technological singularity bent on assimilating everything, its tentacles as long as the Universe.
Will our hero prevail and find a way to keep the secrets of the Sigian Bracelet?

Author Bio:
Even though George Tome was born and lives in Sibiu, a beautiful city in the heart of Transylvania, he doesn’t write about vampires. His dream was to become a sci-fi writer, but he is also a perfectionist, so it took him an awful lot of years and five iterations to finish his debut novel, “The Sigian Bracelet”.
George is a science geek. He loves all aspects and wonders of the world, but most of all astrophysics. He also likes to travel a lot, each time to a different place and country if possible. He is married and has two smart kids. The older one, a boy, loves science and never misses an opportunity to ask a million questions, until his father begs for mercy. He even likes reading instead of playing with the smartphone. His small girl’s dream is to become a fearless warrior and loves competitions – mainly bike, swimming, and ski, in which she already won an impressive hoard of shiny medals.