You are here: Home / Books To Read / The Resentment 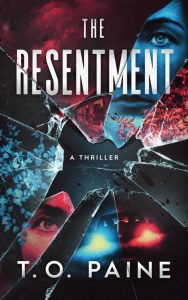 Lauren Kaine has everything she ever wanted — a fabulous home, a shiny Lexus, a bright sixteen-year-old son, and a loving husband with a lucrative internet career. Tonight, she walks hand-in-hand with William beneath the lustrous Seattle sky, celebrating twenty-two years of marriage.

But they’re not alone.

A mysterious black Audi comes out of nowhere and chases William onto a bridge. He shouts, “They’re here for the card,” and falls to his death. Enraged, Lauren attacks the car, but the tinted windows hide the driver’s face, and it speeds away.

Still mourning, she sets out to find her husband’s killer when a stranger calls and demands the card. William never mentioned a card, and she doesn’t know where it is. The stranger follows her. He torments her. He threatens to kidnap her son and throw him into the same river that killed William.

And it’s not just the stranger.

Black cars lurk around every corner. William’s co-workers refuse to talk to her. Her brother-in-law resurfaces after years of silence, and he knows something, but she’s running out of time. She searches for the card, and the past pulls her back to the first time someone kidnapped her son. Back to her resentment. Back to the truth.

T.O. Paine is a suspense novelist whose authentic characters triumph over extreme situations in challenging, true-to-life settings. He enjoys delving into the emotional consequences of his character’s choices and taking his readers along for the ride. Though his novels are contemporary, things always get out of control. Cults are real, anger is a disorder, and everyone loses when a friendly competition becomes an obsession.

T.O. holds a master’s degree in information systems, and when he is not writing, you can find him running or cycling through the mountains of Colorado, USA. He has run over thirty marathons, ridden over twenty 100-mile cycling events, and completed an IRONMAN.

T.O. resides with his wife, two children, and a Boston terrier who stares at himself in the mirror, questioning his existence.