You are here: Home / Books To Read / The Progenitor by Sara Wright 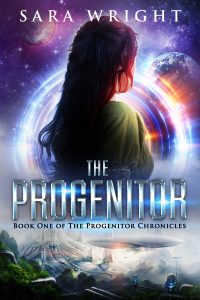 About The Progenitor by Sara Wright:

The Six Systems were known for their peaceful utopia in the Universe, but darkness is on the horizon.

A choice will be made.

When a mysterious spaceship attacks, Princess Xendara’s destiny is altered. Not only does she have to contend with those of the Six Systems who oppose her politically, she’s also discovering a power she didn’t know she had and her enemies are looking to exploit.

A prophecy will force her to make a life altering choice that will change the course of the Universe. Armed with a crystal of the Ancients, she must choose a path or her enemies will make the choice for her.

Prince Darijus of Regvand has known Xendara all her life. When she’s trust into the decaying political arena of the Six Systems, he is more than happy to help. But with their enemies circling, he finds himself intertwined with her destiny in more ways than one.

Will Princess Xendara fall for her enemies schemes or will she risk galactic war?

Will Darijus be able to protect his friend or will he be a pawn in their enemy’s plans?

Only time will tell.

Join Xendara and Darijus as they discover the power of the Ancient architects of the Universe.

Sara Wright lives in a faraway galaxy with her best friends: imagination and creativity. She eats a steady diet of fantasy and science fiction with romance for dessert.

When she was young, she met her friend, imagination, in the form of books read to her by her mother. It fueled the visions she would later turn into her stories. Creativity was Sara’s dance partner for many years but has now been augmented to create books for the populations of Earth.

Earth is her favorite planet to vacation with her husband and their fur babies. When she isn’t traveling to faraway places or writing about them, she loves to cycle, hike, and sing her favorite songs.