You are here: Home / Books To Read / The Portal Lawman by Gail Daley 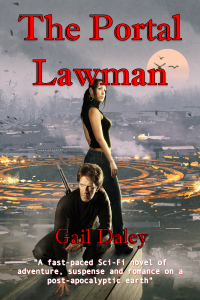 About The Portal Lawman by Gail Daley:

“A fast-paced Sci-Fi novel of adventure, suspense and romance on a post-apocalyptic earth. Trapped in a web of deceit and danger, two young women make dangerous alliances.”
The end of the world had come and gone. Those who remained after the apocalypse did whatever it took to keep themselves alive, and to preserve what civilization survived. Sometimes they broke laws and defied the will of the draconian government agencies who were supposed to keep anarchy at bay.
Lacey Delaney, head of Laughing Mountain’s Portal committee, flouted government edicts by helping Portal Runners smuggle desperately needed goods, services, and people to the Forbidden Colonies.
Joyce Higgins has a stalker who is terrorizing her and her young sisters. When she and her sisters are accused of being clones by the Parallel Genetic Agency, they take refuge in Laughing Mountain. A Clone isn’t considered a human being with rights under the law, but the property of whoever created it. Deputy Mark Connors says he can protect them, but can he?
Malachi Sullivan, sub-commander of the free militia, is one of those who hold the line against the tyranny of an overbearing government aided and abetted by powerful industrial giants.
Lacey and Malachi had been in love once, but a treacherous woman broke them apart. Now they must put the past behind them and work together to save their town and preserve the secret of the Portal to the Forbidden Colonies.

Author Bio:
A writer of Fantasy and Science Fiction stories, Gail has received high praise for her beautifully interlaced, imaginative worlds. She populates her universes with vital and interesting characters, skillfully intertwining their everyday lives with world changing events.
An omnivorous reader, she was inspired by her son, also a writer, to finish some of the incomplete novels she had begun over the years. She is heavily involved in local art groups and fills her time reading, writing, painting in acrylics, and spending time with her husband of 46 plus years.
Gail has a background in business and used this expertise to develop a series of pamphlets (lumped together under the title “The Modern Artist’s Handbook) advising artists and authors about how to improve their bottom line by applying business practices to the development and sale of their work.
Currently her family is owned by two cats, a mischievous young cat called Mab (after the fairy queen of air and darkness) and a mellow Gray Princess named Moonstone. In the past, the family shared their home with many dogs, cats and a Guinea Pig, all of whom have passed over the rainbow bridge. A recent major surgery on her stomach, a bout with breast cancer, and arthritis in her hands have slowed her down a little, but she continues to write and paint.