You are here: Home / Fantasy / The Philosopher’s Guild 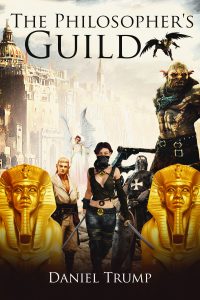 About The Philosopher’s Guild:

In The Philosopher’s Guild the world’s most renowned philosophers – the Buddha, Plato, Socrates, Simone de Beauvoir, Charles Darwin – are created as teenagers in the fantasy city-state of Lothen. This follows their lives and adventures in said city, defending it from its threats: Hobbes, a deadly rogue assassin; Nietzsche, a deadly warrior; and Nicky Machiavelli, a brilliant and overly ambitious court wizard. Follow their adventures in this fantasy novel by Daniel Trump.

Author Bio:
Daniel Trump grew up in suburbs of Detroit and Chicago reading fantasy many fantasy epics. He graduated from college with a bachelor’s in English Literature from the University of Iowa. Then his life derailed – he became mentally ill in his twenties and was diagnosed with paranoid schizophrenia. Since then he spent many years fighting the illness and finding himself and now writes about mental health issues and genre fiction. He lives in Grayslake, Illinois and writes horror, fantasy, and science fiction, frequently about teenagers.