You are here: Home / Books To Read / The Order 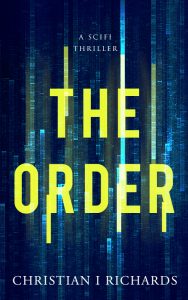 Land of the free. The shining city on the hill. America is the place anyone, with hard work and dedication, can fulfill their wildest dreams. It is where each and every one of us is in control of our own destiny. But is it really?

Jericho Morgan, an up-and-coming MMA fighter in his twenties, watches helplessly as his mother is shot in the head by an agent of the globe-spanning sinister conglomerate, the Order. This sets the young man on a quest for justice. Teaming up with an aging Scottish wanderer named Marcus Killihan, who has been battling the Order for many years, Jericho works tirelessly to find damning information on the organization. This puts him in the crosshairs of a merciless alien hunter/killer known only as the Assassin. If it takes Jericho more than one lifetime to bring the Order to its knees, then so be it.

Author Bio:
Originally from Oakland, California, Christian spent much of his youth growing up on boats in San Francisco Bay, then the United States Virgin Islands. It was in the USVI that he developed his craving for knowledge and adventure. Being escorted for 2 days by a whale, swimming with a 20-foot ray, sitting in the cockpit of an F-14 on the deck of the Nimitz, and hanging out for a day with Shel Silverstein will do that to you.

Growing up dancing to live music in the islands practically every day eventually led to Christian’s passion for ballet. He attended the University of Oklahoma as a Ballet Pedagogy major and went on to have a professional dance career with Ballet Oklahoma, Nevada Dance Theater, and Ohio Ballet. Upon retiring at the ripe old age of 28, he attended Southern Methodist University and received his MFA in Choreographic Theory and Practice. From there, Christian went on to direct college programs, teach and choreograph all over the country and found his own professional contemporary ballet company.

At 40, a major life-changing event occurred. Christian developed a serve neuropathy in his legs, causing great pain, and could no longer teach dance. After going through 3 years of depression, trying to figure out how to reinvent himself, Christian decided to take a stab at a life-long ambition and write a book. The Order is that first effort. Writing allowed Christian to have a creative, expressive outlet. It saved his life.

Now, on the correct medicines, Christian teaches and choreographs part-time in Virginia. But his true passion is now writing. Keep an eye out for Orion, the second book in the Tales of Jericho series!