You are here: Home / Books To Read / The Order of the Dark Rose by P. H. Solomon 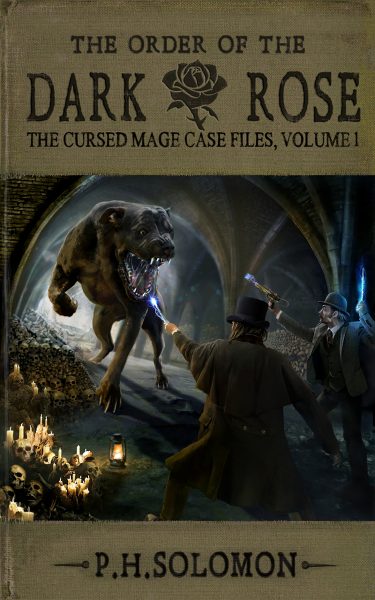 The Order of the Dark Rose by P. H. Solomon

An arch-mage can handle almost anything. Unless he’s cursed, lost his job and facing an unknown enemy.

The Gallantean Empire relies increasingly upon magical technology which cleans sewers, runs trams and much more. Within the capital city of Cal Rindon, magic is pervasive, but not necessarily used without criminal activity. The bustling metropolis boasts constant innovations mixed with growing pains. Amid the good lurks the bad with unrest and growing crime.

Arch-mage Manny Mandeheim fell under a curse, watched his fiancé die, and then lost his job as a spy. So what’s an arch-mage to do? Start his own magical investigation service while he works to clear his good name and maybe avenge his lost love. With his very un-magical partner, Wish Ackford, Manny discovers the menace of a much larger conspiracy than he expected looming behind his curse. The limitations from the hex leave him at a distinct disadvantage as he and Wish investigate.

Assassins lurk at every corner or in every tram car. The threat of an unknown mastermind with murky intentions lingers just out of sight. A questionable source offers the hint of a secret order hounding Manny’s footsteps. A murder leads to wrenching discoveries.

Nothing an arch-mage can’t handle…

Unless the curse limits how much magic he can use or kills him outright.

A mixture of gaslamp fantasy and Sherlock Holmes-like cases, The Order of the Dark Rose is a sleuth private detective mystery set in an alternate fantasy world where magic is both commonplace and dangerous. Mysteries abound in this original, new fantasy from P. H. Solomon, author of the award-winning, best-selling epic fantasy series, The Bow of Hart Saga.

Can Manny survive long enough to break his curse? Or will the arch-mage’s hidden foe escape him? Click the BUY Now button at the top to enter this high concept world of magic and fantasy to discover more about Manny and Wish.

U. S. author, P. H. Solomon grew up with a love of books including fantasy. Always interested in odd details, history and the world around him, P. H. has found an outlet in writing where he mixes a wide range of interests from the regular world, history and anthropology into his fantasy books.

His epic fantasy series, The Bow of Hart Saga, brought a fresh viewpoint to the genre where magic, myth and mysticism mingle. Described by readers as a “mixture of the classic fantasy past with new ideas.”

The latest series, The Cursed Mage Case Files is a mash-up of classic Sherlock Holmes, The Dresden Files and Harry Potter into a unique fantasy world where magic is both an arcane practice and a technological power to be harnessed. Join Mandlefred Mandeheim and Wishton Ackford as they team up to investigate magical mysteries.