You are here: Home / Books To Read / The Menocht Loop: A Progression Fantasy Epic by Lorne Ryburn 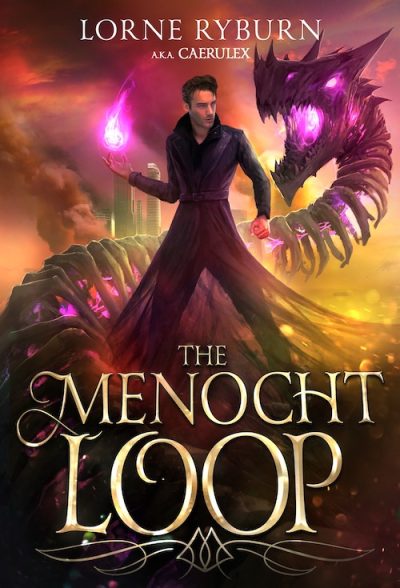 The Menocht Loop: A Progression Fantasy Epic by Lorne Ryburn

Ian Dunai is trapped in the only maze an arch-decemancer can’t escape. Time.

Only 1% of the population is blessed with magic affinity at birth. Fewer still have high enough affinities to rule. Ian’s decemancy eclipses all, granting him ultimate control over Death. He conquers cities with a thought and turns them into ruins with a gesture. But overwhelming power isn’t enough to escape the time loop or reveal its purpose.

When Ian discovers a critical clue that he missed years ago, escape is finally at his fingertips.

Little does he know, he’s been stuck in the first realm.

To celebrate the release of the third book in the series, we are putting the first book on sale for $0.99 until May 26, 2022. Grab your copy today!

Lorne (also known online as caerulex) is an avid reader who strives to write the kinds of stories they would like to read. Besides web serials, their favorite series tend toward grimdark fantasy, such as The Broken Empire Trilogy by Mark Lawrence and The Acts of Caine by Matthew Woodring Stover. The Menocht Loop is their second book series, which they began after publishing Apex Predator as an online web serial.​

When not writing, Lorne enjoys time spent with loved ones and traveling the world. They spend their days as an AI/machine learning software engineer.