You are here: Home / Action & Adventure / The Legend of the Pantheon: Seaborn 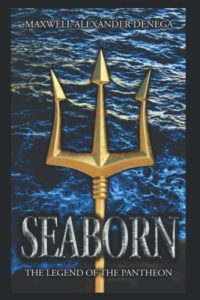 About The Legend of the Pantheon: Seaborn:

If you enjoyed the Percy Jackson series you will love this! What if the stories of the gods were true? California, 2022. Paul, a veteran US Navy SEAL Operator, had spent his life fighting for his country. Abandoned at birth and raised by a Naval Officer, being a soldier was all he had ever known. When his team is brutally attacked by an immortal during a joint mission in Iraq with the British SAS, Paul’s life begins to unravel. Pushed to his limits, broken and discarded, he must embark on a journey of rediscovery. One that will unearth the hidden truth of what he really is. Thrust into a tangled world of scorned gods and ancient feuds, Paul must decide whether to deny the fates or face a destiny he never thought possible and enemies he never knew he had.

Maxwell Alexander Denega was born in 1991 in Devon, UK. Growing up, he was fascinated with Greek mythology and action adventure. As a military veteran, Maxwell brings together his personal experiences from serving in the British Navy and his passion for Greek mythology in his first book of this series, The Legend of the Pantheon: Seaborn.