You are here: Home / Books To Read / The Journey to Our Unknown by Curt Krull 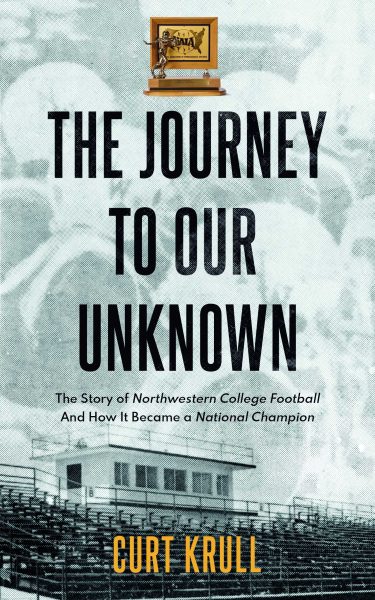 The Journey to Our Unknown by Curt Krull

Its been 50 years (2022) since the Northwestern College Red Raiders appeared in its first NAIA Division II championship game against Missouri Southern, in Joplin, Missouri. Despite being outmanned at every position on the field, the Raiders held a 14-7 lead with just three minutes to go in the game, but two turnovers and a crucial penalty allowed Southern to dramatically come away with the title.

The following season would see Northwestern go to South Dakota State and beat them handily, 38-28. But, more importantly, the ’73 team would go on to win the NAIA Division II championship, finishing a run of 28 wins in 29 games over the course of two and a half seasons (the only loss was the Missouri Southern disaster).

Curt Krull was the starting quarterback for the Red Raiders during the ’70-’73 seasons. Curt has always known that the undefeated seasons, the playoff wins, and the eventual championship did not start and end with just the teams that played during 1972 and 1973. They were the product of the hard work, sacrifices, and leadership of the teams prior to all the glory.

“The Journey to Our Unknown” is the story of how Northwestern College football went from an 0-7-1 record in 1967 to a national champion in just six seasons.

Curt has been inducted into the Central Lyon High School Athletic Hall of Fame and the Northwestern College Hall of Fame.

He has been both a college and high school football coach and spent the majority of his adult years as a trial attorney (35 years). He is now retired from this profession.

Curt spends a lot of time with his children and granddaughter and enjoys traveling, reading, and a little golf once in a while.