You are here: Home / Books To Read / The Gods Must Be Crazy!: Cradle of Communism to Catacomb of Capitalism by SAJI MADAPAT 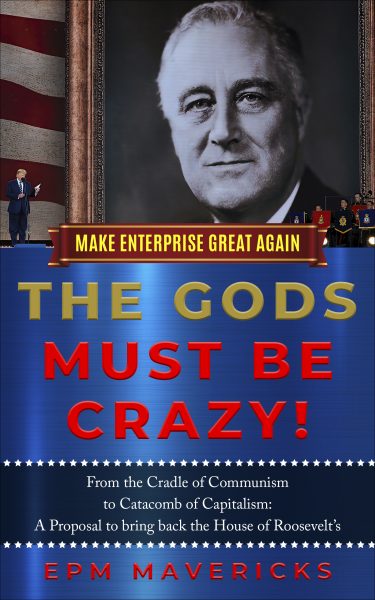 The Gods Must Be Crazy!: Cradle of Communism to Catacomb of Capitalism by SAJI MADAPAT

This book takes its title from the 1980 comedy film “The Gods Must Be Crazy,” in which an empty Coca-Cola bottle is dropped from a plane onto a community of African bushmen. The bottle is thought to be a gift from the Gods, but after it incites bitter fighting amongst the villagers, the tribal leader decides to return it to the Gods, embarking upon a journey to the end of the world. Through my own metaphorical coke bottle, I visualize the dawn of a daunting new Empire. This book serves as both a testament to the past glories of the current American Empire and a guidebook to restoring Capitalism and Enterprise – before it is too late.
———————————————-

Ay Yi Yai Yi! We are in the middle of TheNew World Order!

Empires rise, decline, and fall. History has witnessed this cycle with the Romans, the Ottomans, and the British. They have all toppled, and if we are not careful, the US will be the next.

Many of today’s enterprises are a gaggle of debt-addicted extreme financial engineering frogs floundering in tepid snake oil. Unfortunately, many will find their demise in the clutches of IP vultures.

If we don’t play our trump cards right, the next voracious Empire – the Middle Kingdom of China – will consume us; sending their errand boys to collect bills from the US and over a hundred other countries that it has economically and digitally colonized since the Economic Tsunami of 2008, through “Belt and Road Initiative” (BRI) to its “Digital Silk Road” (DSR).

“Make Enterprise Great Again” digs into the foundations of capitalism and traces the ideals, triumphs and zeitgeist of the Roosevelt years in order to “Build Back Better” – and to save us from the impending Fourth Reich.

I was born and raised in God’s Own Country, Kerala, a tropical paradise in India. In Kerala, we are followers of St. Thomas, the Apostle, educated by Christian missionaries brought by colonizers from Portugal, France, and Britain. 100% literacy and high educational standards in Kerala have led to many progressive movements, including Communism. Kerala has many unique records, such as a model COVID-19 recovery rate being higher than most Western countries. The first place where communists became democratically elected to power in world history, ruled as such since 1957. The resulting industrial desert brought on by Communism forced me to pack up my bags after obtaining my Industrial Engineering degree (with specialization in Total Quality Management) and seek a job in Bombay (the commercial capital of India).

In 2009, I packed my bags for the Cambodian Jungles in search of answers from the bottom of the pyramid through Chinese GIFT (Global Institute for Tomorrow) – a Clinton Global Young executive Leadership Program (YLP). The more I examined the finance world in the West, the more disillusioned I became. I lost faith in the rollercoasters of flash markets (90% of today’s stock market without long-term fundamental values is chasing stock buybacks, the Tweets, QE, the hot dollars, and high-frequency algorithmic flash gambles by BOTs) –hail to Hernando de Soto. I was born again to The Mystery of Capital Gospel. Since 9/11, I have won a few dollars betting against the conventional Western market wisdom by gambling in Petro China and Total.

After returning from the wilderness of the Cambodian killing fields, I reincarnated my career yet again, becoming an EPM (Enterprise Performance Management) out of the 2008 Economic Tsunami in the BIG4 world. I made 95% of my net worth between 2008 to 2011 by betting against conventional wisdom. (When the whole world deleveraged, I leveraged to the extreme in some of the most iconic real estate in the world which was on Fire-Sale). I do have a fair share of blood on my hands with mindless EPM Financial Engineering through fancy jargon (aka Cost Cutting) such as Tax Effective Supply Chain Management (TESCM), Business/Finance/IT Transformation, BPR, Six Sigma and Pricing and Profitability strategy.

Sadly, after over two decades, it looks like I need to ride back through that Mad Max fury redemption road and climb through the capitalist apocalypse rubble left from Roosevelt’s days.