You are here: Home / Books To Read / The Fate of Lenn 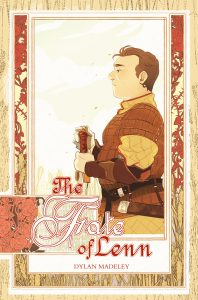 About The Fate of Lenn:

“Like a book already written, turn a page forward or back, read a line or a page, yet all the words in that book exist at once, unchanging; is this how you see it? Like fate? Do we fall no matter what I do?”

Future generations will mythologize Duke Lenn Wancyek, but he is a person like any other. He feels hope, worry, loss, pain, and the weight of a kingdom on his shoulders. When his responsibilities place him in a catastrophic situation from which he may not escape, his values will resonate through his actions more thoroughly than any speech he could ever make.

You will meet everyone who looks to him and you will see their struggles which run concurrent with his: a friend and adviser who wishes to steer him right; three musicians who think they have landed the greatest job in the kingdom; a gardener who does so much yet asks so little; a woman who works to free her people. The list goes on, but time grows short.

You will meet the man who becomes the legend. You will know the fate of Lenn.

Author Bio:
Dylan Madeley is a Torontonian currently working out of a headquarters in Vaughan, Ontario. He is the copy editor of and a frequent contributor to Auxiliary Magazine, an alternative fashion and music zine. His first novel, The Gift-Knight’s Quest, was released May 28, 2015. He has appeared at The Word on the Street Festival in Toronto, Canada’s largest book fair, and successfully debuted his second novel, The Crown Princess’ Voyage, at the Ad Astra convention in May 2017. He completed his trilogy with the official release of The Masked Queen’s Lament in July 2018. His fourth book, Alathea: Goddess and Empress, was released in the disastrous pandemic month of May 2020; his fifth, Prince Ewald the Brave, was released May 1, 2021. His latest, The Fate of Lenn, rounded out the series on September 14, 2021.