You are here: Home / Books To Read / The Ericksen Connection by Barry L Becker 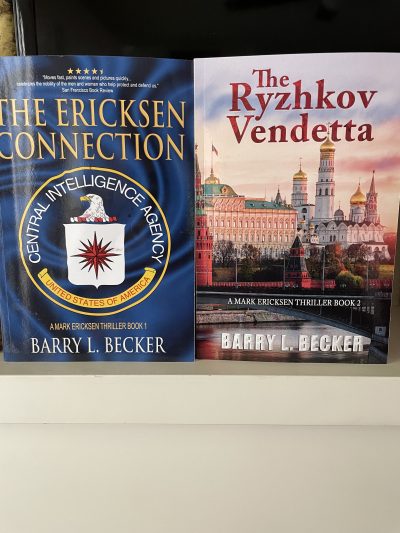 The Ericksen Connection is an espionage thriller about betrayal, PTSD, corruption, conspiracy, murder, and terrorism. Mark Ericksen, the former Navy SEAL Team-Six operator, and successful business executive with an Oregon biometrics company, was all about duty, honor, and country. He resigned his commission in 2002, and over the next several years working for three defense contractors, maintaining his top-secret security clearance while hiding his PTSD.
In 2009, the CIA received actionable intelligence about a wealthy terrorist mastermind aided by Russian arms dealers who needs a classified biometrics encryption communications system from EyeD4 Systems, to direct his sleeper cell operatives in launching a horrific nuclear attack on American cities. Ericksen is the executive vice-president of the company.
When America urgently needs his services again, the CIA tasks him for Operation Avenging Eagles to sabotage the plot. Can Ericksen avoid discovery and thwart the nuclear attack before a network of terrorists achieve their evil plans?

Author Bio:
Barry L. Becker retired in 2013 after spending twenty years as a sole proprietor for an independent manufacturers’ representative company in Oregon. He also had provided marketing consulting services for corporations in the biometrics technology industry.
Mr. Becker previously served as vice-president of international sales and marketing for Eyedentify, an Oregon company specializing in eye-retinal scanning technology for positive identification.
In 1987, he wrote an article entitled “Eyedentify Counters Security Threat,” which appeared in the Journal of Defense and Diplomacy. The Ericksen Connection is A Mark Ericksen Thriller Book 1. The Ryzhkov Vendetta is A Mark Ericksen Thriller Book 2 which was released June 14, 2021.