You are here: Home / Books To Read / The Dual Path: An Earth to Stars Adventure by AnnaMariah Nau 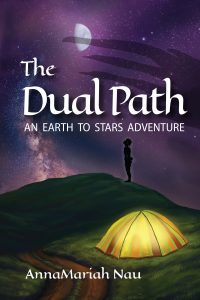 About The Dual Path: An Earth to Stars Adventure by AnnaMariah Nau:

What would you do if your eccentric, possibly magical aunt invited you to learn to “live the world”? Would you accept even if you had no idea what she meant? Zelia said, “Yes,” and the magic began…

When twelve-year-old Zelia agrees to spend the summer with her Aunt Joy, she hopes for a peaceful, not-too-boring vacation from her parents. But from the moment she sees her aunt dancing up the road in her kaleidoscopic dress, Zelia realizes she’s in for an adventure. She accepts her aunt’s invitation to “live the world she is meant to live.” Zelia soon abandons everything she thought she knew about herself and the “real world” as she claims a new name, Zemma, and dives into a magical book embarking on the dual path to discover her own surprising powers. They encounter mythical creatures, talking animals and trees, traveling from the Earth to the stars, and joining a joyful, wise-cracking band of travelers.

It’s not just the magical creatures that surprise her but also that the world is so much more than she could have imagined. Zelia is fascinated to learn the true story about the disappearance of unicorns and to discover that “pretend” creatures like Puff the Magic Dragon are based on real interdimensional friendships. It turns out there’s a logical science to the magical world. As she masters its tools, she learns that her mind has no limits. Zelia learns to fish by simply inviting her dinner onto a hook. She learns to fly with the help of an amazing bicycle created only for her. All the while, Aunt Joy offers her guidance as she challenges everything Zelia ever believed – and finds out that becoming a woman means claiming her true gifts, learning to laugh, and embracing the impossible.

As they go on their way, Zelia and Aunt Joy help people and make powerful friends but also see signs of a terrible curse stifling the world: the dead-eyed ones. Clever and dangerous, these entities cast a mind-dulling spell on whole towns, replacing delight and passion with drudgery and conformity.

In this first book of the Earth to the Stars series, Zelia must decide if she will return to the ordinary world or leap into the next with her new friends to join the fight for freedom and creativity.

Author Bio:
AnnaMariah has an unquenchable thirst for the Wonder and Magic, connecting us all heart to heart. She’s a visionary in magical realism, sharing the wonder, love, and magic she experiences in the world and beyond. She’s always felt something was missing in the portrayal of magic; it’s not all about hocus pocus or witches and warlocks. Another magic goes deeper, right to the soul of the Universe and who we are as humans.

“Sometimes all it takes to believe in yourself is to see that you aren’t the only one who feels there’s something more,” she says. AnnaMariah writes to help you discover what that might be for you as she infuses her writing with mysticism, wonder, love, and her rather off-beat humor that she hopes will speak to your joyous heart.

Her wandering nature has led her to live all over the United States and is now back in Oregon to stay… maybe. Her adventurous spirit will take her readers from the Earth to the stars and beyond

When you are in tune with the space of magic, anything is possible, and you can feel grounded in the Earth and expanded into the stars and beyond. From this perspective of magic, she began to write, and the magic began…