You are here: Home / Books To Read / The Diner Con by L. Joseph Shosty 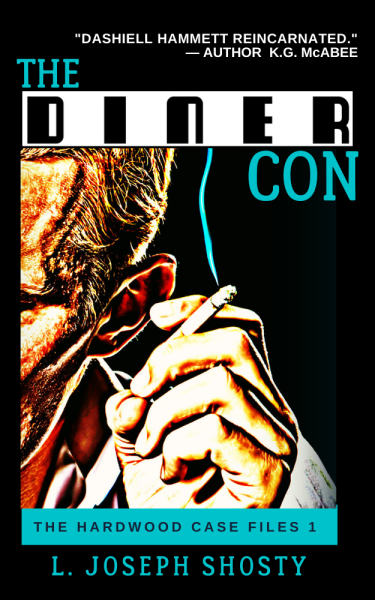 The year is 1950. Johnny Hardwood used to be an actor, but he got typecast playing detectives. So he quit the business and became what people thought he should be. Now he’s got a big case involving a man named Mort Peters, who embezzled money from a major film studio and then faked his death, leaving a penniless widow behind. Johnny’s tracked him to a little place south of Sacramento, in the middle of nowhere. On the outside, Herbie’s Diner is just another run-down greasy spoon with bad coffee and overcooked fried chicken, but Johnny’s about to learn that appearances are deceiving. Soon, the coffee’s run out, and there’s a bevy of killers, swindlers, femme fatales, and other types straight out of a private eye flick, looking to put him down for the dirt nap. Only this isn’t the movies. The bullets are real, pain hurts, and the good guys don’t always win. Johnny’s got his back against the wall. He has to decide if he’s really a tough-as-nails detective, or if he’s still an actor at heart, playing pretend. And he’d better think fast because the people out for his skin don’t care which he is. Actor or detective, they all die the same way.

L. Joseph Shosty has twenty-plus years in publishing, doing everything from writing in a host of genres to stints as a literary critic and a freelance editor. He is the creator of several series, including The Hardwood Case Files (hardboiled mystery) and The Adventures of Achilles & Swiss (science fiction).