You are here: Home / Books To Read / The Crooked Little Pieces: Volume 1 by Sophia Lambton 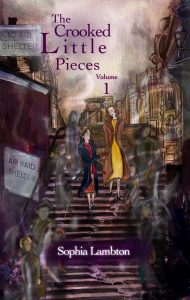 About The Crooked Little Pieces: Volume 1 by Sophia Lambton:

Lost are the creatures destined never to be understood.

1926. Professor Josef van der Holt obtains a post at an all women’s college overseas. Stuffy London suddenly becomes the site for the unseemly exploits of his half-Dutch and half-German daughters Anneliese and Isabel. When tragedy carves out a hollow in their lives, a severed soul sends the sororal twins along a jagged path: while Isabel takes flight in sensual hedonism Anneliese skirts danger in her role as sleuth. Elusive are the sentiments they seek: swift stopovers of fleeting feeling. Lopsided loves and passions scarcely probable veer each away from the predictable.

And when the obvious appears unstoppable the opposite may achingly be true.

Spanning the twentieth century’s five most volatile decades, The Crooked Little Pieces is a series about inextricable entanglements. Perverse relationships pervade a glossary of scenes. Plots criss-cross over a rich tapestry of twists and tension-fuelling characters: some relatable, others opaque and many “crooked”.

It is television drama. Novelised.

Sophia Lambton became a professional classical music critic at the age of seventeen when she began writing for Musical Opinion, Britain’s oldest music magazine. Since then she has contributed to The Guardian, Bachtrack, musicOMH, BroadwayWorld, BBC Music Magazine and OperaWire, and conducted operatic research around the world for a non-fiction work set to be published in 2023.

Crepuscular Musings – her recently spawned cultural Substack – provides vivid explorations of tv and cinema together with reviews of operas, concerts and recitals at sophialambton.substack.com

The Crooked Little Pieces is her first literary saga. Currently she’s working on her second.

She lives in London.