You are here: Home / Books To Read / The Choirboy and the Bellydancer by Christine Potter 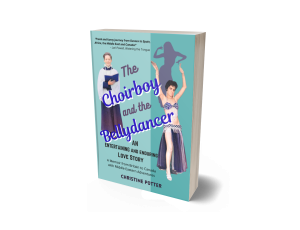 About The Choirboy and the Bellydancer by Christine Potter:

An entertaining love story of two English-born war babies who met at 16 when HE took her home because SHE had nowhere to live. Their stories flash back to postwar childhoods and to the young Christine’s wild experiences in West Africa and Spain. The young lovers were dragged apart after a year when she joined her parents in the Middle East, where she became a bellydancer. At 18, they met up again, under hilarious circumstances, and despite the odds against them, married at 21 and emigrated to Canada. People gave them six months at best. Today, 57 years later, they’re still in love, and still married. The Choirboy and the Bellydancer is the first of two volumes.
Says just one reviewer: “Frank, funny, and entertaining, (this is a) heartwarming coming of age memoir that carries you through two lives at a cracking pace. With her unique style, Potter describes the highs and lows of an adventurous and fascinating life well lived.” (Check out more reviews on Amazon.ca and Amazon.com)

Born in England during WWII, Christine emigrated to Canada in 1965 with her (once-a-choirboy) husband. As a ‘mature student’ she supplemented her almost non-existent education with courses at British Columbia’s Simon Fraser University and Kwantlen College. She has written for numerous business publications and daily newspapers, and broadcast regularly on radio and television. She created and produced HolidayMaker, a national travel magazine, which took her around the world in her hunt for stories. She lives with Christopher, her spouse of almost six decades, in BC. Their son Leon is a drama teacher on Vancouver Island.