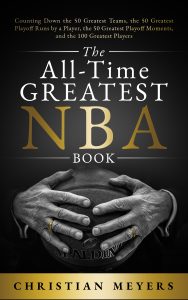 This is not your ordinary greatest players/teams list. This book is not influenced by homerism, and there are no head-scratching picks just to drive attention. This book gives a broad view of what makes a certain player or team great. It uses a combination of a variety of statistics, countless references from well-respected sports journalists, opinions from a variety of NBA players and coaches, and a refreshing point of view from a die-hard and dedicated NBA fan to reach the most unbiased and the most educated rankings.

In The All-Time Greatest NBA Book, you’ll find:
-Rarely talked about records and statistics that teams like the 1985 Los Angeles Lakers or 2018 Golden State Warriors were able to break.
-Fun discussions on who would win in a hypothetical 7-game playoff series’ between teams like the 2013 Miami Heat vs the 1992 Chicago Bulls, and the 2001 Los Angeles Lakers vs the 1986 Boston Celtics.
-The reasons why Allen Iverson’s 2001 playoff performance and LeBron James’ 2009 playoff performance are undoubtedly among the 50 greatest playoff runs of all time.
-Rarely talked about game-winners that occurred in a game 7 of a playoff series, like Sam Jones in 1962 and Bob Dandridge in 1979.
The most in-depth analysis of the legacies of the 100 greatest players of all time.

This book invites discussions and debates, but it does not belittle any player or team. This book will inform you about these all-time great players and teams that will give you all the ammo you need to dominate your next GOAT debate with your friends.

My name is Christian Meyers, and I am a huge fan of the NBA. I’m 29 years old and my memory of watching basketball goes as far back to the glorious 1999 lockout season. I remember being a huge fan of Michael Jordan. I remember the day my parents purchased me a Michael Jordan jersey from K-Mart, and I wanted to wear that jersey every time I played basketball on my Fisher-Price goal. In my mind, I was Jordan playing for the Chicago Bulls.

Since this book is solely about ranking the greatest teams and players of all time, one might conclude that a person that’s never witnessed so many great players play cannot objectively rank the players that were around before my time. I don’t blame you for thinking that way, but there is a well-respected journalist that has come to the defense of people like me who have such a love for the NBA.

That person is Bob Ryan, who’s been around the NBA since players like Bill Russell and Elgin Baylor were playing. He’s an award-winning columnist and he wrote for The Boston Globe for decades. He wrote this article for Boston.com in 2008, and he said something that resonates with me deeply. He wrote this, “I’d tend to forgive him on the basis of him not being there, but that would mean that history requires that you had to be there. I wasn’t present for the Gettysburg Address or the Bobby Thomson home run, but that doesn’t mean I can’t have a good idea of what it must have been like to be there. That’s what being an historian entails. You do your homework.”

I consider myself a historian of the league. I care about it deeply. I pay more attention to the events that transpired decades ago than what’s going on in the league right now. I’m deeply interested in what made the Boston Celtics of the 1960’s so great. I wonder often why Wilt Chamberlain never won more than 3 championships in his career. I find myself watching games from the 80s and 90s, and studying the box score of the games from the 1970s. I did my homework, but I loved every second of it. Although I’m a fairly young person, I have a deep appreciation for the pioneers of the game. To make an extensive list like this, you need to have that quality. That’s something that I’ve always had.