You are here: Home / Books To Read / The Akashi Records Keeper by David Gaughan 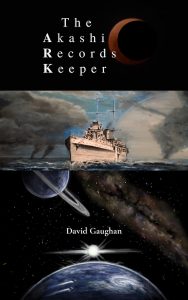 About The Akashi Records Keeper by David Gaughan:

The project rainbow Philadelphia experiment 1943, the wartime experiment with radar invisibility that resulted in a ship disappearing physically, is the starting point of this time space adventure. Zakeera, a starship commander, is tasked with rescuing the pilot of a spaceship that was dragged in with that experiment, trapped in hyperspace. However, his real mission is to find the location and purpose of a mysterious force called the ARK, an acronym for the Akashi Records Keeper, which has been associated with the Earth since the beginning of time on this planet. It is believed that the ARK is the main hub that feeds the akashic record, containing information on every living entity and every action, past, present and future.

Traveling back in time, Zakeera merges with the pilot of the trapped spacecraft and, as a result of that mission, stumbles across a hollow earth entrance that leads to the kingdom of Agatha Shamballa. Upon meeting the ruler of the the hollow earth Agatha, his adventures continue, leading him back to the surface of the planet and also time travel into the future, where he discovers the purpose of his mission. It is said that the one who discovers the power of the ARK and comes in control of that power, has the ability to control the universe. What he discovers, is a clue for all of us to become masters of our destiny, opening the possibility of a brighter future for all humankind.

This Sagittarius has always been the explorer, not only in world travel pursuits but also alternative fringe subjects. Much of David’s overseas travel has been fueled by his keen interest in metaphysical subjects, his writing influenced by the rich tapestry of life experiences.