You are here: Home / Action & Adventure / The Adventures of Jimmy Crikey: The Emerald Lake by Wallace E Briggs 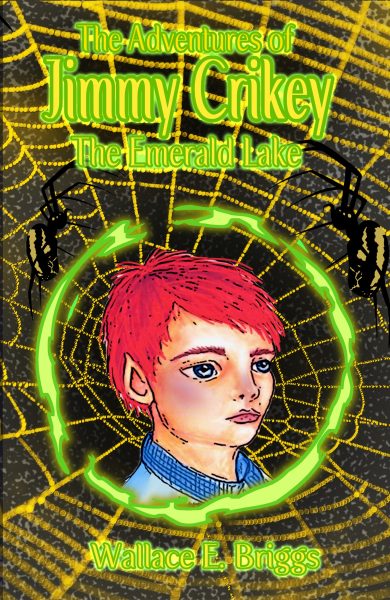 The Adventures of Jimmy Crikey: The Emerald Lake by Wallace E Briggs

This is a stand-alone, fourth in series, of the adventures of Jimmy Crikey, the alien orphan who, despite cruel bullying, decided to make his home on Earth. He numbers among his friends the four witch guardians of Earth’s realms and the ancient Lord Oron, aka The Weatherman.
The underground Emerald Lake, the home of the Aquamites, is invaded by a flesh-eating, fire-breathing serpent, which is impervious to the magic of the four guardian witches. Matilda, the chief witch, asks for Jimmy’s assistance.
Jimmy accompanies Elwinn, witch guardian of everything associated with water, to visit the Emerald Lake. They arrive at a plausible plan to capture the serpents in a Golden Orb spiders’ web net.
Their strategy is complicated because Jimmy cannot breathe underwater unless included in Elwinn’s bubble. Several of the strongest young Aquamites agree to act as live bait to entice the serpents into a lake in an extinct volcano’s caldera.
Once the serpents are lured into the volcano’s lake Jimmy, with the help of his starship SR3 and XRU, the intelligent computer/navigator, will trap the reptiles in a spiders web net, ready to drag the creatures into the cold depths of deep space.
Jimmy’s heart is captured at first sight of Annison, a young, golden-headed Aquamite who is also the daughter of Milton, the leader of the tribe.
During the operation to rid the Aquamite’s world of serpents, Annison is seriously injured when one serpent takes a bite out of her lower tail. She is dying from the loss of blood. The witches do not have the power to help. There is no time to get her to Jimmy’s home plane of Attalia for advanced surgery.
All appears lost until Lord Oron reveals his real identity. Lord Oron is one of the Lords who serve the all-powerful Master. The Master could save Annison, but he refuses to bring a subject back to life from the dead. Can Lord Oron persuade the Master to intervene and save the life of Jimmy’s first love, Annison?

Wallace Briggs (1943 – present). Happily married to Pat in 1964, who I first met at the age of eleven.
My early years were experienced in and around Durham, never living more than 5ml distance from the Cathedral. Married in 1964, Pat and I spent many happy years in the North East of England before employment almost took us off to emigrate to South Africa. But plans were changed in the final weeks and the company moved the family to Sussex in the South of England.
After more than twenty years in Sussex, then Hampshire, employment was again responsible for the move to beautiful rural Lancashire, where we still reside. I am now retired from a long career in sales and marketing of technical products in the UK and international markets.
Jimmy Crikey was born one rainy day during a family holiday in Great Yarmouth, to entertain my son and his new-found friends for an hour or so. The story expanded over the following showery afternoons in the cramped confines of a beach tent, and more and more adventures were required to keep the children entertained.
I look forward to sharing the adventures of Jimmy Crikey with a wider audience in the hope that they will bring a sense of wonder and enjoyment to another generation.