You are here: Home / Books To Read / Testing the Limits by Kate Lance 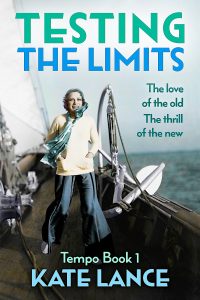 About Testing the Limits by Kate Lance:

“I can’t recommend this series highly enough: the writing is brilliant, the story wonderful, obviously well researched; and you can’t help but fall in love with the characters. Great stuff!” Amazon review

1930s England: and for a group of friends it seems as if the sunny days of sailing, flying and love will never end.

A deepwater sailing ship takes restless young Eliza McKee to a new life in glamorous London, but when she meets the handsome star of a talking film it’s not quite the life she expects.

Eliza’s brother Pete yearns to fly, and pilot Billie Quinn can teach him. Pete calls her a sarcastic, scowling Amelia Earhart, but it’s Billie who knows how much Pete has to learn.

Eliza’s aunt, actress Izabel Peres, hides a secret from the world. Then she falls for lawyer Felix with his buccaneering smile, and a case of shellshock he believes is behind him.

For Eliza’s friends, the days of contentment are fading before the gathering dusk of war. And when a great white barque encounters the coast one foggy night, more than an era of sail finds itself tested to the limits.

Currently only $0.99. Testing the Limits is the first book in the Tempo series, by the winner of the Mountbatten Maritime Award and the Western Australian Premier’s Book Award for Non-Fiction.

Kate (CM) Lance grew up on Lake Macquarie, NSW, Australia. Her background is in science and technology, but then she ran across the story of the charmed life of an old Broome pearling lugger, Redbill, and discovered the joys of archival research and writing. Her first book, Redbill: From Pearls to Peace, won the Western Australian Premier’s Book Award for Non-Fiction, and her second book, Alan Villiers: Voyager of the Winds, won the Mountbatten Maritime Award. Her novel, The Turning Tide, was published by Allen & Unwin under the name CM Lance. Other novels include Silver Highways, Atomic Sea, Testing the Limits and Embers at Midnight. She lives in South Gippsland, Victoria, Australia.