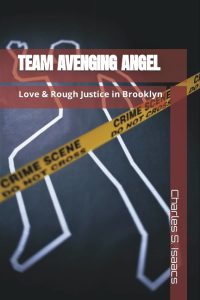 Book 2 in a series

She is an African-American survivor of a racially-charged childhood rape, who grows into a strikingly beautiful assassin. He is the Italian-American private eye with Mafia connections who loves her. Together, they take on serial killers, sex traffickers, kidnappers, child molesters, rapists, wife-beaters, predators and exploiters.

Along the way, women they’ve protected join them in their quest. Frustrated and threatened by a corrupt criminal justice system, though, the team is forced to work outside, and often against, the law.

When she finds herself pitted against a unit of the Haitian secret police, and he finds out why he is being framed for a series of murders, the stakes could not be higher.

Charles S. Isaacs has been a schoolteacher, a college professor, a community organizer, a Congressional consultant, a social activist, a gambler and an occasional journalist. He has written opinion columns and feature stories for numerous newspapers and magazines, including The New York Times Magazine. During recent decades, he has been a consultant to dozens of non-profit organizations operating in the social justice arena. His recent published work includes fiction, poetry and award-winning non-fiction.