You are here: Home / Books To Read / Sylvanus: Book of Alce by R.P. O’Ryan 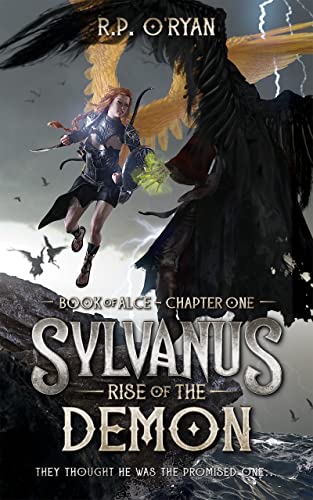 Sylvanus: Book of Alce (Book 1: Rise of the Demon)

They thought he was the savior.

An ancient prophecy tells of the coming of the Promised One, who would restore peace and harmony to the land in the name of their God, Eyu. When the twins are born, Michael and Lucero, people believe one will be him.

Lucero travels to the otherworld to spread the word of Eyu, where he befriends Dancing Elk, a local native.
When an evil mage meddles, a beast arises, things change, and all belief is called into question. Now, the monster roams, and the fate of all creation is thrust upon Dancing Elk, an unwilling bystander who doesn’t know what to do.

In Rise of the Demon, the trilogy’s first volume, Lucero is plagued by dark impulses during his mission to spread the word of Eyu to the outerworld. There, he encounters shaman-to-be Dancing Elk, a local native who inadvertently becomes entangled in the ancient prophecy.

It is now up to Dancing Elk to stop the creature’s rampage before all creation is destroyed. The only problem….he doesn’t know how.

Jump into the Sylvan saga for an epic adventure you won’t regret.

R.P. O’Ryan retired after 32 years as a Training Specialist for Customs and Border Protection and USDA. Before that, he worked in the zoo field for eighteen years, starting as an animal technician and working his way to Curator of Reptiles and later Assistant Director.
O’ Ryan studied martial arts and later taught Hap-Ki-Do at the School With No Roof to low-income students.

Outside of writing, he enjoys working with bonsai, photography, and kettlebell training.

For years, dreams were the fuel for his writing. The stories they engendered would remain an ever-present distraction until written. Now that he is retired, he will publish his stories for others to enjoy.