You are here: Home / Books To Read / Strangers in the Night: The Hunter and the Spider #“1 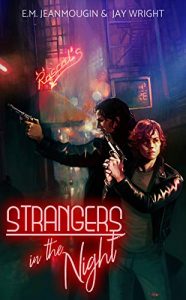 About Strangers in the Night: The Hunter and the Spider #“1:

Where there’s demons, there’s bound to be demon hunters and in Brooklyn there’s no shortage of either.

Jasper Craig is a hunter at New York’s secret St. James Academy, and he’s one of the best. With superior strength, agility, and a handy ability to sense demonic energy, it’s like he was born for the job. Since he was orphaned at a young age, his parents took the secret of what, exactly, he is to their graves. And if his adoptive father knows, he’s not telling.

Loyal to the cause of keeping the mortal world safe from the evils of demons, there isn’t anything Jasper wouldn’t do. So when his father and superior officer tells him to go undercover to trick a rare and dangerous werespider, Jasper agrees.

Crimson Apocalypse is one of New York’s oldest residents and the only known werespider in the north eastern United States. He’s the sort of guy who lives as fast as he talks and talks as fast as he drives, and if Jasper wants to get closer to the werespider he’s going to have to keep up.
But getting closer might be dangerous in more ways than one and what Jasper learns may not be what he expects.

Strangers in the Night is a tense, action-filled urban fantasy. A story of self-discovery in a world where things are not always what they seem and the lines between good and evil are hard to draw.

Author Bio:
An American/Canadian duo, E.M. Jeanmougin and Jay Wright met online when they were twelve years old and have been writing together ever since. Both are fans of a variety of books, movies, video games, and board games. Altogether, they own five cats. These books are their passion project and they’re very excited to share them.