You are here: Home / Books To Read / Stranded (The Shorten Chronicles Book 1) by Rosalind Tate 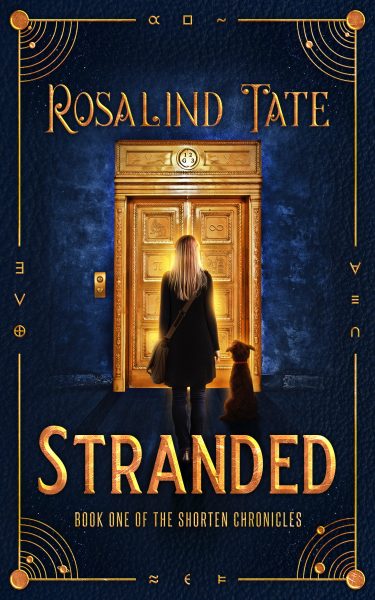 Sophie Arundel is stranded in history, stuck in a grand house in 1925 England. Thankfully, she has her faithful dog Charlotte with her. Oh, and fellow student Hugo, annoying and charming in equal measure.

Baffled by upper-class rules, courted by boring suitors, Sophie is desperate to get back to the twenty-first century. But the only way home is through a hidden portal — and she must work with Hugo to unlock its secrets.

As one clue leads to another, Sophie and Hugo discover that history is unfolding differently. Mobs rule the streets. And when chaos turns into a deadly revolution, anyone in a grand house is fair game.

Sophie and Hugo are running out of time…

Get This Fantasy Book From Amazon.

Rosalind Tate is the author of the bestselling Shorten Chronicles, the romantic time travel/sci-fi series launched in 2020.

Sophie Arundel, her dog Charlotte, and Sophie’s soulmates, Hugo and Freddy, must survive perilous adventures in different parallel universes and defeat ever more powerful enemies. If they can’t work out the portal’s most terrifying secret, they’ll never escape its power, and never return home.

The idea for the first book in the series, Stranded, came to Rosalind in 2016 while she was watching the TV show, Downton, and the time-travel series grew from there!

Stranded is set in an alternate 1925 England, in a grand country house. It sold 11,000 copies within a year, was a Page Turner Awards Finalist, and won the 2021 Readers’ Favorite Silver Medal (Time Travel). For a few days in February 2021, Stranded outranked Outlander and Harry Potter on Amazon.

Book 2, Escape, was published to rave reviews in October 2021.

In Book 3, Exile, published in 2022, the four friends land in a very different place and time…

Rosalind Tate lives in Gloucestershire, England, and holidays on the Cornish coast. She served in the British military, then worked as a journalist and a lawyer. She has grown up children, a tolerant husband and two utterly gorgeous dogs.

Rosalind’s looking forward to speaking at authors’ conferences in person. She loves talking about publishing and encouraging new authors. When she’s not behind her computer, you can find Rosalind reading her favourite books, walking her dogs, swimming, or watching her favourite Sc-Fi and Fantasy shows, like Grimm and Lucifer.