You are here: Home / Books To Read / Stones of Gratitude by Beau Adams 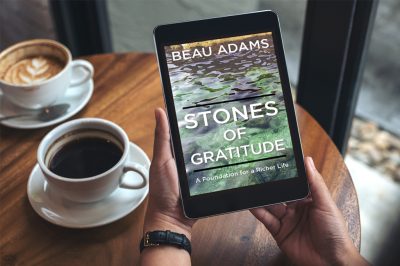 Stones of Gratitude by Beau Adams

In medieval times, attempts to find a way to turn ordinary matter into gold were called alchemy. We now understand alchemy to be a forerunner of the modern study of chemistry, but what if people really do have the ability to turn what they touch to gold? Would having that kind of magical power be something that interests you?

What if I told you it involves gratitude? Would you be willing to wander down that path and see if that could possibly be true?

This little book is a series of stepping stones down that path. In Stones of Gratitude, Dr. Beau Adams explains how a single act of gratitude changed the course of history for an entire nation.

Author Bio:
Dr. Beau Adams received his bachelor of arts in communications from Georgia State University before earning a master’s of divinity from New Orleans Baptist Theological Seminary. He also holds a PhD in organizational leadership from the University of Phoenix.

Adams is the pastor of Community Bible Church in Stockbridge, Georgia. The church—which has a membership of six thousand Christians—reaches an audience of thousands more both locally and internationally through its online campuses and satellite locations. It has been on Outreach magazine’s list of the hundred fastest-growing churches in America several times.

Adams is affiliated with Dr. John Maxwell’s EQUIP Ministries, which sends pastors overseas to train other pastors and church leaders. Through EQUIP, Adams has spoken publicly in Brazil, Portugal, England, and India.

Adams first book, Seven Stupid Things People Do to Mess Up Their Lives (and how not to do them) is the 2019 Best Indie Book Award winner in the Christian category.

Beau is married to Kim and they have two adult children. He is the owner of “the greatest dog in the world.” Beau is also the Atlanta Falcons #2 fan (Kim is #1).