You are here: Home / Books To Read / Stilettos and Scoundrels by L.C. Turner 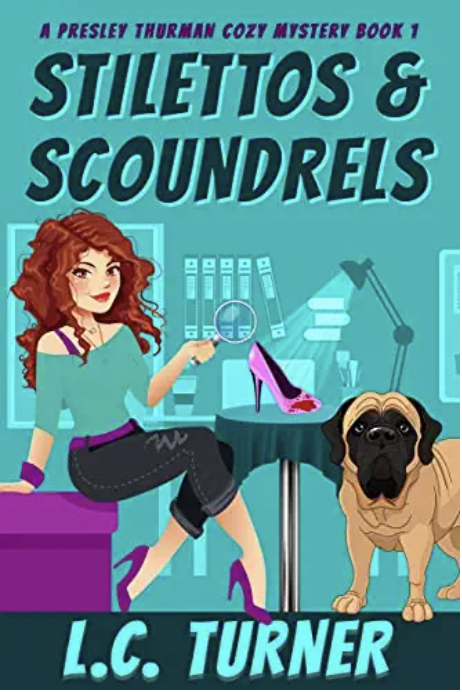 Stilettos and Scoundrels by L.C. Turner

The newly jobless Presley Thurman heads back to her hometown, Hunter’s Hollow, to run her mother’s flower shop, Petal Pushers while her parents are basking in the joy of a month-long cruise. Presley’s planning a boring and easy month working as a florist while she figures out her next career move. But when she delivers flowers to a well-known senator, her humdrum month takes a turn for the worse.

After Presley finds Senator Daniels dead in his hotel room, Presley’s once again embroiled in a mystery where she’s the number one suspect. Determined to get herself off the suspect list, Presley sets out to uncover the truth with the help of her old high school crush, Cooper Sands. Discovering the senator’s wicked and wanton ways sets a motive, but it doesn’t clear her name.

Will Presley find the scoundrel’s killer and keep herself out of jail?

Presley, and her loyal canine sidekick Bella, are on the case!

As a child, L.C. thought she would either be a truck driver (thanks to Jerry Reed in Smokey and the Bandit) or work at Taco Bell (her favorite restaurant as a child). As she grew older, she realized her talents lay in other areas, and for the last several years has been a college professor teaching business and English.

Through all her career choices, she has continued to have a passion for writing stemming from childhood, where, as an only child, she developed a vivid imagination.

She is proud of her vast experiences in life from barrel racing, to being on the dance team for a semi-pro basketball team, to being a mom of 2 amazing kids.

She decided to follow her dream as an author in 2009 and has worked her way up to having 5 fans (maybe 6 now). She often tells her family and friends that no one is safe from his or her ventures slipping into her books. She lives in Indiana with her husband, kids and two very spoiled dogs.