You are here: Home / Books To Read / Special District: Harbin by Tim Stickel 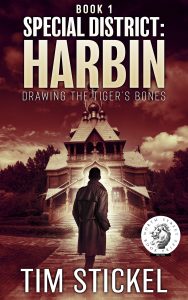 Borya Melnikov is a mixed-race patrolman in Harbin’s Special District police force, a young honest man who takes his job seriously. When he’s promoted from chasing pickpockets to investigating a high-profile murder and dismemberment, nothing can prepare him for the dark secrets he will uncover along the way.

Paired with the legendary senior Inspector Chinn, they begin their investigation, tracing the victim’s and murderer’s footsteps through the city’s most upscale boulevards to its seediest boroughs and even to the frontiers of Manchuria. As they unravel the deadly mystery, danger abounds in the form of ethnic prejudices, local power struggles, and a growing Red terror campaign. And with a brewing border war with the Soviet Union fueling the instability of the region, the clock is running out to solve this dark and prominent murder.

Borya’s unique background might be the key to cracking the case where others have failed, but can he and Inspector Chinn survive long enough to do so?

Find out in this first place winner of the 2021 North Street Book Award for Genre Fiction.

I discovered that writing historical fiction was a way of sharing my own love of history with others. The story-telling aspect allows one to be immersed in the past that ordinary non-fiction cannot. My Harbin Mysteries series take place in cosmopolitan city of Harbin China. I strive to be as accurate to the real past as possible. That includes research of available academic books and articles, travel books, magazines, and maps from the time period.