You are here: Home / Books To Read / Son of the Moon: A Quest for the Perfect Woman by Amo Sulaiman 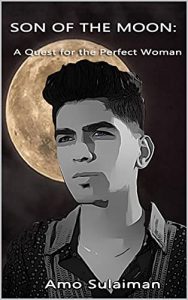 About Son of the Moon: A Quest for the Perfect Woman by Amo Sulaiman:

He’s but a boy still, in his late teens, exotic, charming, a naïve stranger in a strange land with an unquenchable thirst for pleasure. Saddled from birth with a name that takes people aback, El Nobis von Albion sets out on a noble mission in life: to unite with his missing other half. And for a while, his strategic wit and his habit of poetically praising women’s sensuality right to their faces win him one homerun after another.
But, unfortunately, his high-spirited foster mom never taught him that Pretty is as pretty does, so when he finally meets the Perfect Woman, the tables start to turn. He finds himself being sucked down into a situation that could threaten his freedom…and even his very life.

Author Bio:
Born in Guyana and continuing his education in Canada, Amo Sulaiman received a B.A. Degree in Philosophy and Psychology at the University of Guelph in Ontario. B.A. in English and American Literarure. He then completed his Master’s Degree in Philosophy in Montreal. Shortly after this, he went to Switzerland where he did his Doctorate in Philosophy at the University of Bern. He has been living in Switzerland ever since.
Besides publishing two books on philosophy, one on English Literature, and several academic articles, Proud City is his first novel, followed by Destroyer and Possessed President.