You are here: Home / Adult / Sins of the Flesh 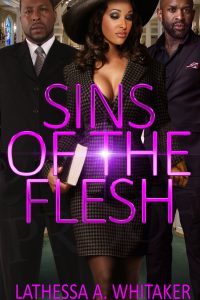 About Sins of the Flesh:

“Sins of the Flesh” is a steamy, erotic fiction with unexpected twists and turns to the plot that will surely keep you guessing what will happen next. The story takes place in Small- town, Saintsville, Mississippi, when Maxine gives up her dreams of becoming a doctor to marry Jeremy after a two-year courtship. They acquire it all, money, well-known reputations, and respect when Jeremy’s father suddenly passes, and he becomes the town’s pastor. Their marriage begins to take a turn for the worse as the First-lady struggles to accept the path God has laid out for her. As Maxine and Jeremy drift apart, Maxine meets a handsome, stunning, gray-eyed stranger named Shaun Bryson.
Maxine is smitten with Shaun’s city, bad boy charm and struggles to avoid his seductive advances. Unable to hide her desires for Shaun, Maxine makes one fateful decision that can destroy everything the couple have accomplished. Maxine knows her actions have disastrous consequences, but she cannot let Shaun go as she realizes her feelings for him are deeper than just a “roll between the sheets.”
Jeremy furiously devises a wicked plan of his own to “even the score” after he discovers his wife’s betrayal. Soon, the couple find themselves descending into an abyss of secrets where they will have to fight to survive or be prepared to meet their “Maker”.

I was born on July 14, 1971, in Utica, Mississippi. It was during my attendance at Utica High School where I developed a love for writing. I initially start out writing poems, but soon discovered that writing fiction was more enjoyable. After graduating high school, I began my military career with the U.S Army Reserves. While serving in the Reserves, I attended Alcorn State University, majoring in Biology and participating in Alcorn State University’s ROTC program. I was commissioned as an officer in the U.S. Army in 1996. In 1998, I started the first draft of my new novel, “Sins of the Flesh”. After an extensive career in the Army, I retired in 2017 in Virginia where I currently resides with my loving daughter. Since retiring, I have decided to complete the writings I started so many years ago. So, in my spare time, I write fiction novels and continue to support the military effort by working as a government contractor assigned to Fort Lee. I have also been a proud member of Alpha Kappa Alpha Sorority, Inc. since 1998 in which I enjoy providing service to the community when possible. Besides writing, I enjoy spending time with family, friends, cooking, and trying new activities.