You are here: Home / Books To Read / Silent Child 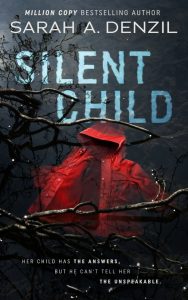 In the summer of 2006, Emma Price watched helplessly as her six-year-old son’s red coat was fished out of the River Ouse. It was the tragic story of the year – a little boy, Aiden, wandered away from school during a terrible flood, fell into the river, and drowned.

His body was never recovered.

Too traumatized to speak, he raises endless questions and answers none. Only his body tells the story of his decade-long disappearance. The historic broken bones and injuries cast a mere glimpse into the horrors Aiden has experienced. Aiden never drowned. Aiden was taken.

As Emma attempts to reconnect with her now teenage son, she must unmask the monster who took him away from her. But who, in their tiny village, could be capable of such a crime?

It’s Aiden who has the answers, but he cannot tell her the unspeakable.

This dark and disturbing psychological novel is a page-turner you will not be able to put down.

Sarah A. Denzil is a million copy bestselling author of psychological suspense novels. Her books include number one bestseller Silent Child, which was a Goodreads Choice semi-finalist in 2017. Her books have been published in several different languages and have appeared on the Wall Street Journal bestseller list.

Sarah lives in Yorkshire with her husband and cat, enjoying the scenic countryside and rather unpredictable weather. She loves to write moody, psychological fiction with plenty of twists and turns.