You are here: Home / Books To Read / Shadow of Wolves by J.R. White 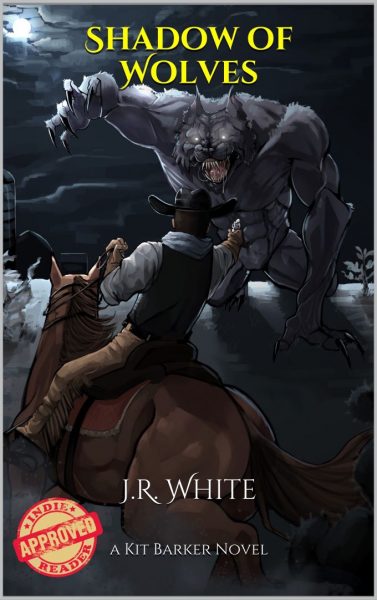 Shadow of Wolves by J.R. White

“An endlessly fun and immersive adventure novel that perfectly mixes horror and western… Shadow of Wolves is pure, distilled, and unfiltered American pulp.” – IndieReader
A Torture Gunfighter. A Navajo Outcast. And the Creature whose claws will stain the Mojave red.
Ruled by a ruthless baron, the mining outpost of Shank’s Point is under siege by a sinister evil. When disappearances become mangled bodies, John Swift-Runner calls on his old friend, a vagabond gunfighter, to stand with him against the coming slaughter. Their hunt for the creature on the burning sands leads them deep into a generations-old mystery of shamanic curses and satanic relics. Can the killing be stopped? Or will Kit Barker, a tortured gunman with a terrible secret, become a footnote in the bloodstained pages of legend?
Available in eBook, Paperback and Audio.
Free on Kindle Unlimited.

Author Bio:
J.R. WHITE has been a sailor, a scientist, and a professional fighter, but he has always been a storyteller. As a merchant sailor he crossed the Arctic Circle, passed through the Straits of Gibraltar, witnessed sea monsters, and participated in a helicopter rescue atop the tallest cliff in Scandinavia. He has worked as a research scientist studying gene therapy for two major universities and spent four years as a professional mixed martial artist. As a civilian contractor he spent three years at Fort Leavenworth, KS, where he taught hand-to-hand combat to personnel from every branch of the military and over ten allied nations.
A father and military spouse, White and his family have lived in eight states in their nomadic journey across America as an Army family.