You are here: Home / Action & Adventure / Seeking the Light of Justice by Barry Nadel 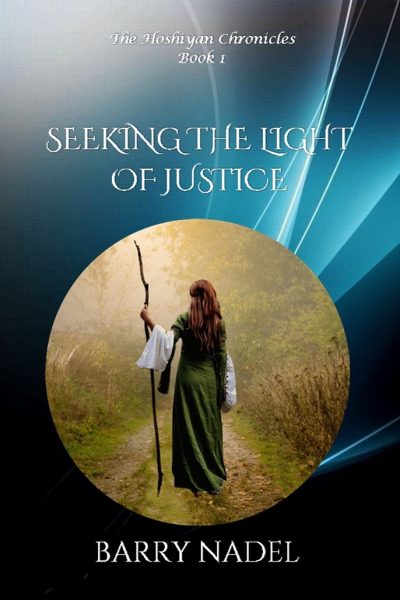 Seeking the Light of Justice by Barry Nadel

Prof. Yoshua Rosenberg, who has been researching the legends of the Light of Justice for years with his archaeologists, discovers the cover of General Aharon Dori’s Hoshiyan Chronicles from the binding of a 500-year-old book and decides to publish it on the Internet.

The release of the cover, however, intercepted by Vatican security, unleashes the wrath of the Church and the Pope, who had an ancient order to destroy the Chronicles or anything having to do with its author, and this leads to the outbreak of the Vatican’s secret war against the Chronicles.

Clues lead the professor and his team to the house of study where the chronicles were written in Spain. The professor uncovers a bombing plot by Basque separatists. During the excavation they open a sealed room exposing the horrors of the Spanish Inquisition. They find forty-six Jewish bodies left to suffocate!

Bewildered, they are illegally arrested by the deputy interior minister and thrown into a notorious Spanish prison.

What will become of them now that they are privy to all these secrets?

From where will there salvation come?

Dr. Nadel was born in Texas (July 11, 1953), and grew up in San Jose, California. He studied for two years Archeology and Anthropology. In 1973 he switched to Enology and Viticulture, receiving his B.Sc. and M.Sc. from UC Davis. He made aliyah to Israel to do his PhD in plant genetics at the Faculty of Agriculture, Hebrew University in Rehovot, which he received in 1981.
Dr. Nadel worked as a researcher in plant biotechnology and physiology for 6 years at the Faculty of Agriculture in Rehovot. He then founded and ran a vegetable seed company for 22 years.
He served in the Army reserves for 13 years in the artillery. Later he was a full-time volunteer for the Border Police, responsible for the security of Moshav Kfar Pines for 10 years.
Dr. Nadel spent two years as the chief scientist of a commercial cannabis company.
Dr. Nadel is currently chief scientist for an agricultural transfer of technology company. and designs mini professional greenhouses.
Dr. Nadel has three daughters, one son and nine grandchildren (5 girls and 5 boys). He is both divorced and a widower. He has been writing for over 35 years both scientific and non-fiction works. For 30 years Dr. Nadel has been writing fiction. He created the Hoshiyan Chronicles. It is a highly spiritual work based on the principles of Justice, Righteousness and Faith. He now also writes children’s books.