You are here: Home / Books To Read / Secret of the Old Tower 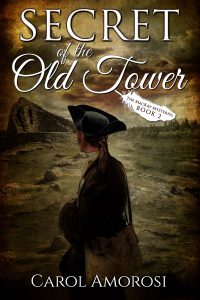 About Secret of the Old Tower:

A family secret. Two dead bodies. The penalty for murder is death.

The year is 1768. Angus MacKay returns to London after five years in the American colonies. He returns home full of hope for the future, but his lack of education soon leaves his dreams shattered. He discovers you can never go home again.

Yearning to prove his worth, Angus heads north to Scotland, to a home torn apart by rebellion, and is catapulted into intrigue. Killers often strike again, and the body count is rising.
Secrets are dangerous, testing loyalties and family ties. It seems everyone has a motive. Can Angus make sense of it all? With his life on the line, the stakes have never been higher.

Travel to the Scottish Highlands in the 18th century. Escape to a land rich in folk traditions and superstitious locals. Secret of the Old Tower is book 2 in the Mackay Mysteries, a historical fiction murder mystery series.

History permeates almost everything Carol enjoys, whether it is travel or volunteer work. Just ask her family! She enjoys gardening, especially learning about plants from the past and their culinary and medicinal uses.

Today, Carol and her husband, Dave, call Germany home, and she spends her time practicing German on their two cats and Widgit, the History Hound, who often joins them on their escapades.

Over the years, she has put her passion for history to good use as a volunteer and an interpreter spanning different periods from the Romans to the Middle Ages to the Revolutionary War, most recently as a member of the 7th Virginia Regiment.

During their tenure in Italy, Carol took part in the Pompeii Food & Drink Project, exploring the eating and drinking habits of the residents in 79 AD. While living on the Eastern Shore of Virginia, Carol volunteered as a docent conducting tours at Ker Place, a colonial home constructed in 1799.