You are here: Home / Books To Read / SCAM A-LAMA HARDBALL by Jinx James 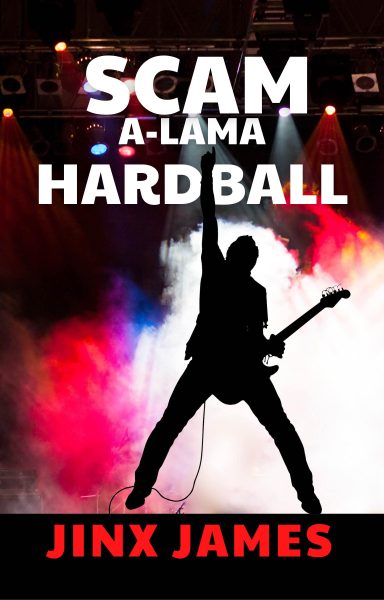 A wickedly dark comedy of trickery, dodgy contracts, celebrity, lies and love – and a twisted plot to con the rock star.
Lured by an irresistible offer of a new album, rock star Marc Charles can’t believe his luck … until the deal turns sour. There’s something underhand going on with the mysterious overseas organization behind the album offer. But contracts are meant to be trashed, aren’t they? Except this offer will get Marc out of his finanial troubles. Torn by the dilemma of recording the shitty song that’s part of the deal and his desperate need to reboot his career, Marc signs the contract. He senses he’s the target of a stand-over tactic, but what can he do? Hell! – rewite the song and make it awesome. Trouble is he hasn’t written a hit for over a decade. Now there is so much to play for and too much to lose.

Get This Humor Book.

Humorous crime writer Jinx James loves Classic Rock and Soul, and anything that’s quirky and somewhat dubious. Working in the music industry, when he travelled the world working with many of the greatest artistes of the day, gave him useful insights into the scams and dodgy antics of Show Business, fuel for his humorous “Con The Rock Star” crime fiction series. His stints in advertising and writing comedy for TV provide inspiration for his other humorous fiction, writing as Kit James.
He was born in the UK and now lives in Australia, so he has included a glossary at the back of his books for readers who might be gobsmacked by Aussie slang. He’s inspired by the masters of humorous crime, writers like Carl Hiaasen, Mike Farici and Caimh McDonnell.
He’d love to hear from you at jinx@jinxjamesbooks.com