You are here: Home / Books To Read / Run With It: A True Story of Parkinson’s, Marathons, the Pandemic, and Love by Joe Drake 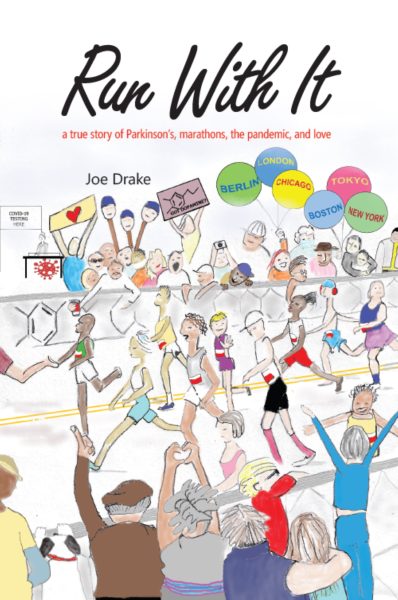 Run With It: A True Story of Parkinson’s, Marathons, the Pandemic, and Love by Joe Drake

COVID-19 disrupted the premier road races known as the World Marathon Majors (WMM) that take place annually in Berlin, London, Chicago, Boston, Tokyo, and New York City. Normally spanning the calendar from March to November, the pandemic forced a rescheduling of the 2021 WMM such that all the races would take place during a six week stretch in the fall. At age 60, with only a single previous marathon under his belt and recently diagnosed with Parkinson’s disease, Joe Drake decided to run all six of these races on the compressed schedule.

In Run With It, writing in a style that is charmingly humorous and informative, Joe marks his debut as an author. He tells of his transformation into a marathoner, the physical and logistical challenges of running these races amid a world eager to emerge from a global catastrophe, and how this quest with the help of friends, family, and the running community allowed him to devise a strategy for coping with Parkinson’s.

Get This Health & Fitness Book.

Joe Drake was born and raised on Long Island, New York, the seventh of twelve children in a family that was not the largest one in their immediate neighborhood. He attended university at the Massachusetts Institute of Technology and graduated in 1984 with Bachelor’s and Master’s degrees in Electrical Engineering.

Upon graduation, Joe moved to the San Francisco Bay Area where he met his wife, Lynn, also an engineer. Together they raised their daughter, Kinsey, 26, and their son, Aidan, 24, in Palo Alto.
Joe spent his engineering career making microelectronic devices of various sorts, including semiconductors, microelectromechanical systems (MEMS), disk drives, lasers, and LIDAR systems.

In 2018, Joe was diagnosed with Parkinson’s disease just shy of turning 57. As is common for those afflicted with incurable neurological diseases, his life changed dramatically with his diagnosis though not necessarily for the worse. Shortly afterward, Joe and Lynn retired to Seattle near where Lynn had grown up and where her family still lives. Stress is a well-known trigger for PD. Hence, removing the stress of an engineering career made sense.

Always one to enjoy sports and outdoor activities, Joe embraced the fact that vigorous exercise is the only therapy that has been shown to be effective at slowing the progression of PD. He turned to running as his primary mode of exercise although he still often bicycles, hikes, and plays soccer. Until his diagnosis, Joe’s running workouts had never been longer than about six miles. Post-diagnosis, he doubled down on the sport and in 2019, at age 58, Joe ran his first marathon and has run 12 marathons since.

In his debut as an author of Run With It: A True Story of Parkinson’s, Marathons, the Pandemic, and Love, Joe describes how exercise and Parkinson’s have become dominant forces in his life. His new purpose is to inspire others with PD, or any other disease or medical condition, to cope through a considered and comprehensive regimen of vigorous exercise.