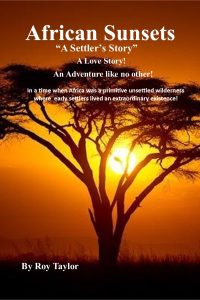 This is an adventure story like no other. The book starts in Scotland and traverses the globe to distant Africa to one of Britain’s colonies, Kenya. It is based in times when the Crown was omnipotent and Settler’s had to be tough and resilient to survive there. The story outlines a loving relationship that not only endures some of the most challenging events but it also demonstrates how huge success was enjoyed even under the most testing circumstances. The book has some basis in factual events from the author’s youth, his Grandparents were some of these early settlers similar to those in the story. Many of the stories that are incorporated into this fictional tale have a factual foundation and the characters in the book were presented with situations just like the original Settlers with the harsh reality that they had left their Motherland which became a reality immediately upon disembarking from the ship that had carried them away to this primitive, unsettled new life.
From the beginning, the book takes us into Africa where wildlife and human interactions were an everyday reality. The opulent lifestyle of having African servants and high living were a reality and along with the hardships of being isolated in the bush far from any neighbors, it became a necessity to take all the steps to protect the family against primitive savagery as the indigenous population became more and more resistant to the oppression of strict rule under a far distant king and his loyal military Governors. This is a book that will grip you with the unexpected at every page turn!

Roy Taylor the author offers some insight through the story into his early youth, where he grew up in Kenya, East Africa.
At the time when he lived there, he became fluent in Swahili and experienced first hand, many of the wild life encounters outlined in this exciting and adventurous novel. This love story is one that many modern day couples could never imagine, but as the author leads you into this world beyond all comprehension , it adds new meaning to where there is a will there is a way! One can only wonder how did they survive and thrive?
Roy is a person who enjoys challenges, He learned bronze casting as an adult at night school, he is an avid golfer, woodworker, bar B Que chef for his friends and family, he enjoys people and what makes them tick and overall he loves life.